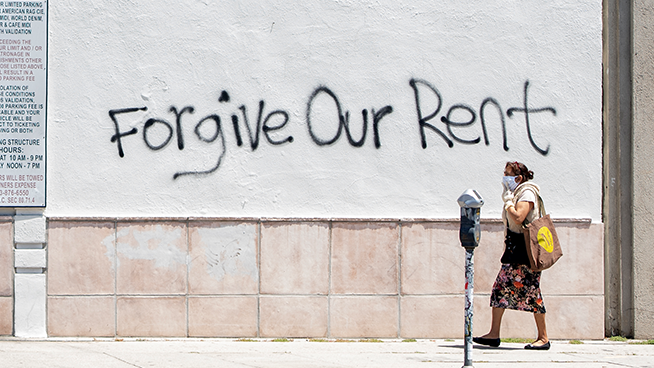 A woman wearing a mask walks past a wall bearing a graffiti asking for rent forgiveness. Several cities and states, including California, have passed executive orders prohibiting eviction of tenants affected by the coronavirus crisis. But when the lockdown lifts, the moratorium will end. And tenants will have to pay their back-rent or move out. (Photo by VALERIE MACON/AFP via Getty Images)

One week from today several resources afforded by the Cares Act will end. This marks an impending financial and housing crisis for many Americans that soon may not be able to pay rent. As this crisis lingers on a local level, 27 mayors across the U.S. have urged Congress to continue to shoulder some of the responsibility on a federal level.

In an op-ed published by the Washing Post, many mayors across the country have expressed urgency to listen to it’s people’s cry for equality as communities of color have disproportionately been effected by America’s current economic crisis. Of the signers, three were Bay Area mayors: London Breed (D) of San Francisco; Libby Schaaf (D) of Oakland; and Sam Liccardo (D) of San Jose, who were joined by three other California mayors: Darrell Steinberg (D) of Sacramento; Michael Tubbs (D) of Stockton; Aja Brown (D) of Compton.

The letter seeks to end systemic racism in one of the areas hardest hit by the Coronavirus – housing.

“Many of the critical resources in the Cares Act will soon run out or expire on July 31. If our representatives are serious about creating racial equity, the path forward is clear: We must dismantle the systems that keep disparities locked in place. Our nation’s housing system — and the programs and policies that perpetuate racial disparities in housing — is the best place to start.”

The Democratic majority in the House of Representatives attempted to remedy some of these problems when it passed the comprehensive HEROES Act yet a Republican Senate and Majority Leader Mitch McConnell assured the Democrats it was dead on arrival. The bill would continue expanded unemployment benefits, extended moratoriums on evictions, establish an emergency rental assistance fund and a homeowner’s assistance fund, along with many other relief efforts tied to the COVID-19 pandemic. The message to Congress was clear, the Heroes Act and others like it must be included in the next stimulus package.
The CARES Act was signed into law in March, which accounts for the first and only act by the federal government to aid in the financial devastation brought on by the COVID-19 Pandemic. Though the $2.2 trillion allotted by the bill was historic in size many criticized that it was not enough. As Congress seeks to pass a new relief package soon these Mayors have laid bare the inequity of housing in America and how it is a problem that must not go untouched by federal relief.
“Even before the covid-19 pandemic, housing has always been the primary contributor to this country’s massive racial wealth gap. The creation of the Federal Housing Administration in 1934 led to discriminatory redlining policies that secured loans for white-only, often suburban subdivisions that mandated the exclusion of African Americans. It also furthered segregation efforts by refusing to insure mortgages in and near African American neighborhoods. These policies created the segregated communities we still live in today and persist through federal disinvestment in affordable housing programs.

The 2008 financial crisis disproportionately impacted black homeowners, who purchased homes with rate terms and conditions less favorable than those offered to white homeowners and experienced higher foreclosure rates. Many have still not recovered financially. Systemic racism created a society where white households have 10 times the wealth of black households. We are at risk of history repeating itself if federal covid-19 relief measures primarily benefit white households.”

“Homeownership is one of the most powerful wealth-building tools available to working families, yet it is still a startlingly white institution. The Federal National Mortgage Association and the Federal Home Loan Mortgage Corporation have passed robust assistance programs for homeowners, but there is a 30-percentage-point difference between black and white homeownership rates — a gap that has actually increased over the past 50 years.”

Though racism and the  COVID-19 pandemic do not seem related on the surface, the economic crisis at hand is exposing decades and decades of racist housing practices and inequities in wealth. As Congress toils away at passing the next stimulus package these Mayor’s, who represent over 17 million Americans and contribute to nearly 1/3 of the nations GDP, want to be united and to be clear.

“It is impossible to fully address these issues without starting at home. After decades of disinvestment and denial, now is the time for Congress to show its commitment to housing programs that support the stability and mobility of people of color.”

The letter demands that the Heroes Act be funded along with additional resources to allocate to new and existing housing safety-net programs such as Section 8 Housing Choice Vouchers, HOME and Community Development Block Grants. It concludes by saying that Congress has an obligation to fund these essential building blocks of equity before leaving for recess in August.