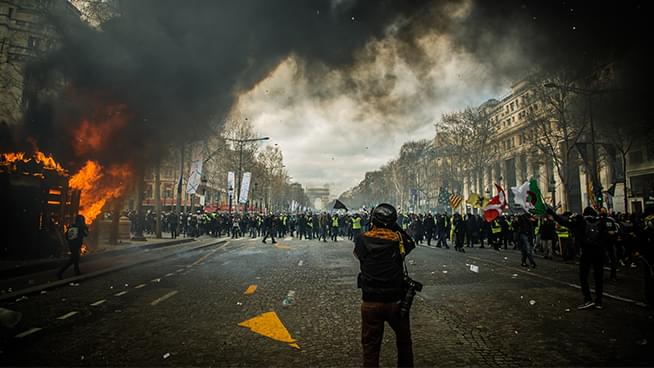 A peaceful protest held in Oakland on Saturday, July 25th in support of racial justice and police reform turned violent causing about $200,000 in damages.

The demonstration had about 700 individuals protesting before, “A small group of demonstrators wearing helmets and goggles and carrying large signs that doubled as shields set fire to a courthouse, vandalized a police station and shot fireworks at officers,” reported KTVU.

“This was different…This group of protesters had specific intentions to participate in one way or another — whether that’s carrying backpacks in with clearly very heavy items, and the smaller group would actually be engaged in doing the damage — there is a nexus with all of the attendees,” said Watson.

“Vandalizing our downtown gives Donald Trump the images he wants and the justification he seeks to send federal troops into American cities. We can’t be fooled and play into his twisted campaign strategy. We celebrate passionate protest but Oaklanders need to know that when they attend protests after dark they may be providing cover for agitators who are more intent on stoking civil unrest than advancing racial justice.”

Protestors, including one Oakland native, Phillip Johnson, told ABC7 he is disappointed and believes the actions of some distract from the Black Lives Matter movement.

“This is a bad image for Oakland, this isn’t going to bring Floyd back, this is damage for the City of Oakland, period,” said Johnson.

Oakland Police sent out a series of tweets warning protestors action will be taken if violence did not stop.

We continue to ask the crowd to disperse because of an unlawful assembly. Some in the crowd are throwing projectiles and pointing illegal lasers at officers. We are using signs and giving vocal commands to the crowd if the assaults continue chemicals will be deployed. pic.twitter.com/Un1Ndrs0AQ

Police did not provide details about arrests made and did not report immediate injuries on either protesters or officers.