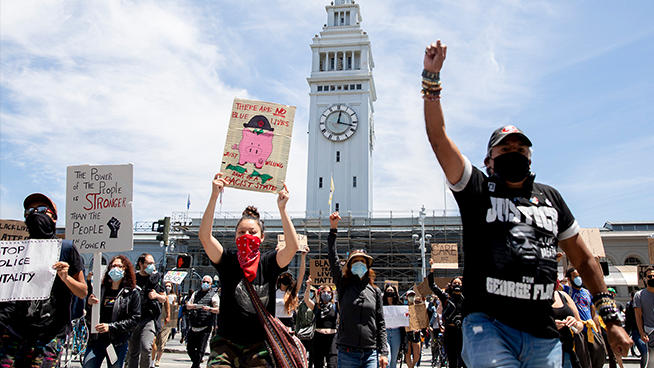 Hundreds of demonstrators march down Market Street from the Ferry Building in solidarity with the Black Lives Matter movement, calling for the defunding of police, investment in Black communities and the resignation of President Trump held in San Francisco, Calif. (Jessica Christian/The San Francisco Chronicle via Getty Images)

Late Monday San Francisco Mayor London Breed, in conjunction with the San Francisco Human Rights Commission (HRC), published a detailed look into the city’s process of community feedback and what reinvesting in Black communities using police funds would look like.

After Black Lives Matter protests swept the nation with calls for dismantling and defunding racist systems, such as local police forces, many cities that have complied are left with a complicated question – by how much and how do we spend that money?

Keeping to her promise on June 4th to defund the San Francisco Police Department (SFPD) the mayor sought to answer this question through open discussions with the public. The report publish by Breed and Supervisor Shamann Walton details community feedback on how to tackle the task of making reparations to African-American communities in not just the short term but also for years to come.

African Americans in San Francisco have the lowest median household income ($31,000 for Black households compared to $116,000 for white households), have the lowest homeownership at 31%, and account for 37% of the city’s homeless population despite only making up only 6% of the population as a whole. Black San Franciscan’s also have the highest mortality rate for nine of the top ten causes of death and are also reported to be the source of 45% of SFPD’s use-of-force cases in 2019.

“If we truly believe that Black Lives Matter, then we need to listen to Black voices, not tell Black people in this city and this country what is best for them. That includes listening to those who have long lost faith in City Hall to actually deliver on promises that are so often made, but not kept,” said Mayor Breed in a statement about the city’s defund effort.

Public commenting has tried to center Black voices in the San Francisco community which has cleared a path for the city to take as the August 1st deadline for the city budget approaches. Many are hopeful that this round of reinvestment might actually stick since the city has finally found a source in which to fund these programs and efforts of equity – the police.

“I’m excited to share what the Black community has identified as priorities, so that we as policy makers can make the resources available to achieve tangible results. With reparations, the redirection of SFPD resources and community truly taking the lead, this is only the beginning.”said Supervisor Shamann Walton.

“Economic recovery is all that matters–solving one half of the police-community conflict is to fund the other half. Governments have funded the massive state police because that is what the Majority wanted. But now is time to reverse it. Fund neighborhoods, you will need fewer police,” said an anonymous Black youth in the report.

Mayor Breed is expected to make a fiscally-tangible announcement later this week on how all this feedback with actually be implemented before the budget deadline Saturday. The Human Rights Commission will host two more meetings for additional meetings for community feedback and in September launch monthly meetings for the community and legislators to review the progress of the newly allocated funds. In October the HRC will tehn begin quarterly meetings to keep the public informed and share updates about the project.