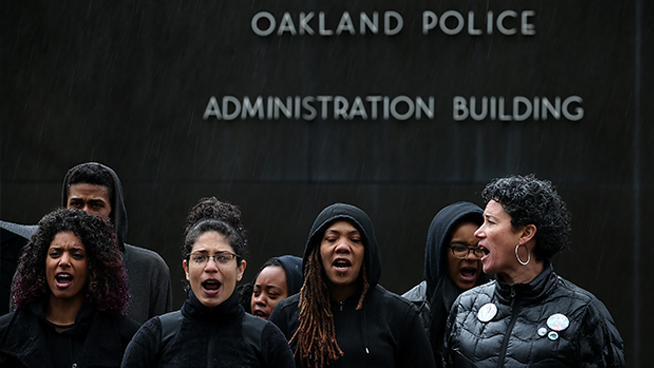 The Oakland City Council voted Wednesday to form a task force meant to “reimagine” public safety. The aptly named the Reimagining Public Safety Task Force is a community-led, transparent, informed commission to explore reducing 50% of the city’s police budget by next year according the Mayor Libby Schaaf.

Oakland’s City Council has struggled to get on the same page about cries to defund police however, the council unanimously passed the measure co-authored by Councilmembers Loren Taylor and Nikki Fortunato Bas.

“This task force is a critical step forward to begin shifting from an institutional frame of enforcement and punishment to creating relationships of care, trust, prevention, and wellness in our community,” Bas said in a press statement.

The task force will be co-chaired by Councilmembers Taylor and Bas and comprised of 17 members from a wide variety of backgrounds and nominated by already elected officials. According to an article by The OaklandSide each councilmember will be able to nominate a single person from their district and each co-chair will have a nomination – this accounts for 11 of the 17 seats. Three more will be nominated by three different public safety commissions: the Community Policing Advisory Board, Safety Services Oversight Committee, and Police Commission. Two more seats will be allocated to youth voices (ages 13- 21) by the Youth Advisory Commission and the final seat will be helmed by a city budget expert who will be nominated by Budget Advisory Commission.

The City Council also set forth criteria, such as being an active member of the Oakland community, for the seat members. The task force is designed to represent diverse perspectives and is actively looking for members of communities that have been affected by over policing and police violence. Examples set forth by the council include: formally incarcerated individuals, victims of violent crime and their families, immigrants, and other marginalized citizens. The council is also looking for experts in public health, knowledge of law enforcement operations, and local union representatives.

The council is looking to have these individuals selected by the end of August and the task force fully operational by mid-September. The urgency of these actions comes from an eager Loren Taylor who wants the members to be fully acclimated and ready to present their budget proposal a year from now. Ultimately this council will be formed to make informed community-based suggestions on how to reallocate OPD funds for the 2021-23 budget.