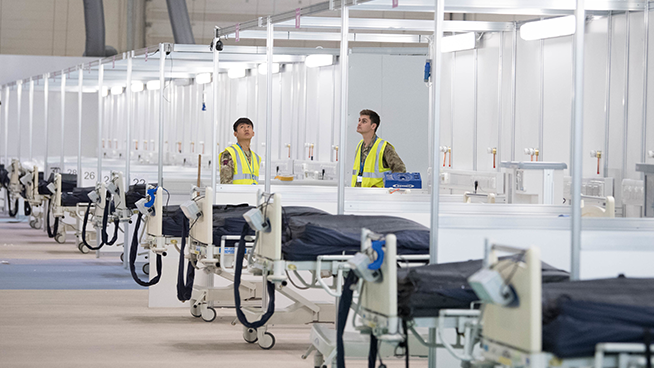 Thursday San Francisco City officials announced they will be opening a new medical facility in the Presidio exclusive to non-COVID patients. The move is a preemptive measure to make room for a surge that health experts anticipate is only going to get worse.

The Director of the San Francisco Department of Public Health, Dr. Grant Colfax, was not ambiguous about the state of COVID-19 cases in the city.

“Let me be clear: We are in a major surge of COVID-19,” Colfax said. “The virus is moving fast and more people are getting seriously ill.”

San Francisco and the Bay Area as a whole has seen its case numbers double in the last month from 393 daily cases in June, to 806 daily cases in July. San Francisco alone has seen its hospitalizations quadruple in the last six weeks and is at a record high of 109. It took 19 days for San Francisco to go from 3,000 to 5,000 cases, 13 days to go from 4,000 to 5,000 cases, and has taken only 9 days to go from 5,000 to 6,000 cases. The virus is moving quickly through the city and health experts are trying to prepare for the worst which they say could reach as many as 2,400 hospitalizations and 1,800 deaths.

“These scenarios unfortunately become more likely as each day goes by with the current trends,” said Dr. Colfax.

Currently, 27 of the 109 hospitalization cases in SF are in the Intensive Care Unit and the need for acute care and ICU beds has risen 15% every week this month according to Supervisor Catherine Stefani, who joined Dr. Colfax in Thursday’s announcement.

The new temporary in-patient facility is expected to be able to treat around 93 patients and create critical availability as severe cases are expected to exponentially increase.

“Opening this facility will allow the city to shore up our medical resources and bolster our hospital capacity. In doing so, we are proactively preparing for future COVID-19 surges,” said Stefani.

San Francisco Mayor London Breed also said today that the city plans to invest heavily in the Latino community, which are the city’s most affected minority. Latinos make up 50% percent of reported cases of COVID-19 in San Francisco, despite the demographic making up just 15% of the population as a whole.

In conjunction COVID Command Center and Latino Task Force (LTF), the Mayor announced a list of programs that would collectively be contributing over $7 million in resources for immigrants, undocumented residents, and other vulnerable San Franciscans.

San Francisco is starting to batten down the hatches and is preparing to weather a heavy storm.