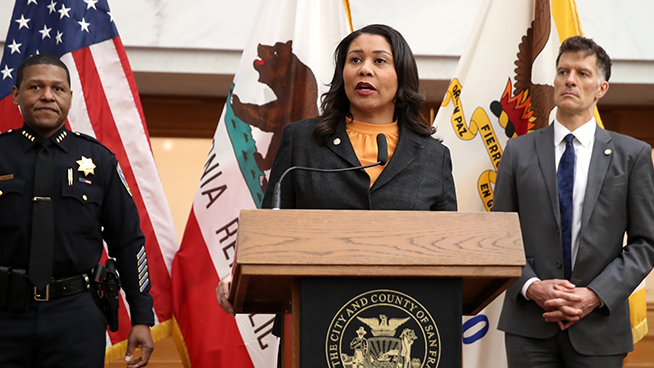 Friday, just before the city’s budget deadline, San Francisco Mayor London Breed announced a proposed budget for 2020-2021 and 2021-2022 that would bridge a $1.5 billion deficit and divest $120 million from the city’s police department.

The budget proposal seeks to carefully balance bridging the large deficit brought on by COVID while also investing strongly back into the community. One of these proposed investments keeps the mayor’s promise of listening to the city’s cries to defunding the SFPD.

Breed announced that $120 million over two years would be divested from the police department as just a “first step” in addressing systemic racism in San Francisco. These funds would in turn be reinvested back into Black communities.

A report released Monday by the Human Rights Commission (HRC) took feedback from Black and African-American communities and ask them what reinvestment should look like. After considering the report, the mayor wants 60% of the funding to be directed for mental health, wellness, and homelessness, and 35% be directed to education, youth development, and economic opportunity. These funds will continue to be open to community feedback and transparency via the HRC.

“Seeing people, not just African-Americans, rise up against police brutality gave me hope that real change in this country is possible,” Breed said at the budget announcement. “But for those who support this movement, for those who truly believe that Black lives matter, it’s important we listen to Black voices. It’s important we allow Black people to lead this movement. And I’m not just talking about me or any of our Black elected leaders who have been fighting this fight for generations. I mean we have to listen to the people in our communities.”

The Mayor’s proposal includes reinvestments of $12.5 million to SFUSD teachers in high turnover schools, $5.5 million to extend the Opportunities for All (OFA) youth internship program, and $4 million to maintain the Office of Racial Equity within the Human Rights Commission.

Breed also announced that the $120 million divestment would come with other police reforms including demilitarizing police equipment, increased accountability for instances of racial bias, and unburdening the police from being responsible for the city’s mental health.

Mental Health SF is a proposed new crisis response team to alleviate police from doing the job of mental health experts. Calls about mental health and drug abuse incidents to 911 or 311 would be diverted to this team which would dispatch a paramedic, a clinician, and a behavioral health peer to handle the situation.

“We need to shift the burden for mental health response calls away from the police,” said Breed. “It’s not fair to ask our officers to do the work of mental health professionals and it is not effective for those in crisis.”

The budget would allocate $66.5 million for the creation of the Crisis Response Team and the Office of Coordinated Care that would exist within the Department of Public Health. The mayor also has allocated funds to continue the Homelessness Recovery Plan and invest in new low-income housing projects.

Breed’s proposal hopes to address not only racial inequality but also the economic devastation felt at the onset of the COVID-19 pandemic. Facing a $1.5 billion shortfall, the mayor proposed several cuts to ensure the city can recoup its losses. The city would tap $339 million from its emergency fund, while leaving it partially intact to hedge future disasters. The budget also asks union representatives to defer any raises for public workers for two years which would free up an estimated $270 million. Internal spending cuts in all public offices and a potential revenue from the Business Tax Reform Measure on the November ballot would also contribute to eradicating the deficit. With these actions, the city would have nearly $2 billion over two years to help mitigate further financial disasters and prevent layoffs of any public worker. However, the city is still in talks with public union reps leaving a question mark on nearly $300 million.

“When we talk about 180,000 San Franciscans applying for unemployment not one of them is doing so because the city cut their job, not one,” Breed said. “With the budget I’m proposing today I want to continue to prevent all layoffs, but to do that we need our labor partners to help us. We need them to delay any planned wage increases for two years.”

So far the mayor said talks are stable with union representatives for the city’s police and fire departments. Breed thinks the trade-off is fair for preventing layoffs, though she made it clear that if the unions do not comply the city will not have the resources to prevent layoffs and limiting city services.

The planned budget also allocated $446 million in continued COVID expenses and infrastructure. However, only $93 million will be assumed from San Francisco’s General Fund as FEMA and the CARES Act will reimburse the remainder. These investments will be used to fund testing, PPE, expanded capacity at hospitals and skilled nursing facilities, outbreak management, contact tracing, and other expenses. The funds will also be used to help with food and shelter resources and multilingual outreach programs.

The budget did however acknowledge several potential pitfalls as it prepares for further financial trouble. Many of the proposed investments back into community programs will draw heavily on the $300 million in funds generated from the Business Tax Reform measure that will be voted on in November. FEMA is also providing reimbursement of some COVID-realted medical expenditures that through the next year would amount to around $100 million. This is a financial support system that could dissolve if a state of emergency is reascended. Furthermore, it is impossible to tell at this point how much more the economy will suffer over the next year and it is predicted by the city’s budget planner that slow economic recovery could cost the city $275 million this year and $400 million in subsequent years.