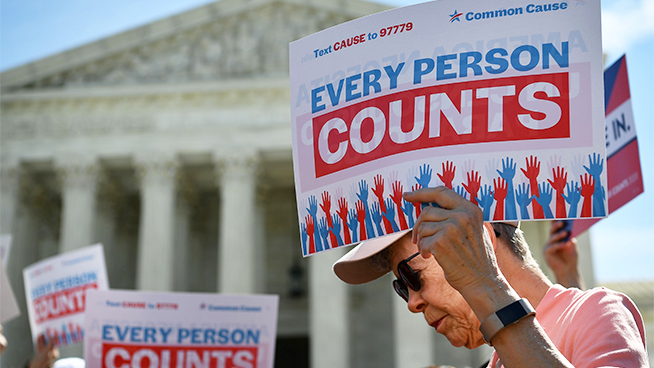 Tuesday top California leaders were outraged at the Census Bureau’s announcement that they would truncate the census process by a month.

Every ten years the United States takes a headcount in every town across the country in the form of the decennial census. This process is foundational in appointing congressmen, allocating federal funding, city planning, and making many other important local and state decisions. However, even with the shortened timeline, the Census Bureau has claimed that this year’s census would not sacrifice accuracy for speed.

“We will improve the speed of our count without sacrificing completeness,” said a statement from the bureau Monday. “As part of our revised plan, we will conduct additional training sessions and provide awards to enumerators in recognition of those who maximize hours worked. We will also keep phone and tablet computer devices for enumeration in use for the maximum time possible.”

The agency’s normal efforts were drastically slowed down due to safety concerns about COVID-19. A fourth-month extension was requested in April by Commerce Secretary Wilbur Ross, who oversees the bureau, but the Senate has sat on its hands and the agency withdrew its request. This inaction combined with the recent announcement of a shortened outreach effort drew the ire of California Governor Gavin Newsom.

“This is sabotage. And an attack on our democracy,” Newsom tweeted. “Don’t let the GOP succeed in undercounting communities across our country.”

“Another blatant threat to our democracy. By ending the 2020 Census early communities of color, immigrants, students & unsheltered residents will go unaccounted & be deprived of vital federal resources for the next decade. Congress must extend the deadline,” Schaaf pleaded.

Each concluded their messages pleading Californian’s to complete the census immediately at https://my2020census.gov.

In-person checks, also known as Nonresponse Followup (NRFU), were delayed in mid-march and just recently started to their renewed efforts in mid-July. To date, only 21 states are starting to partially see census checks that would have normally started in May. Later this week three of the 21 states’ census offices will expand their efforts and four more states will begin to do follow-ups as well. 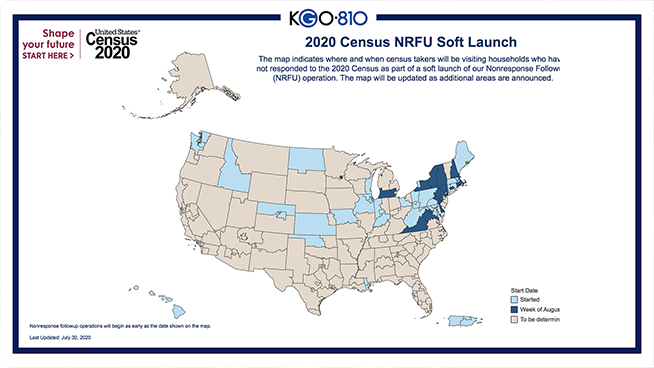 Despite loosing five months of in-person work and stopping counting efforts on September 30 instead of October 31th, the Census Bureau assured that it would meet it’s December 31st deadline. The bureau recently requested $1 billion in supplemental funding from the White House to achieve this goal.

Donald Bendz, Media Coordinator for the 2020 Census, told KGO Tuesday that so far the Bay Area is leading California in its response. Though Piedmont, reporting at 87%, is leading the state, he also stated that San Francisco’s self-response rate is at 61%, three points below the state average. According to the Census Bureau only 63% of Americans, 93 million households, have completed the 2020 Census so far.

“The census is mandated by the constitution,” Bendz said reminding people that filling out the form is a civic duty. “A complete and accurate count means that hundreds of billions of dollars that go back to communities will get their fair share because of accurate census data.”

Bendz encourages those who have not responded yet to go online or complete the form by phone or by mail to avoid a knock at your door during a pandemic. California is set to start door-to-door checks next week.