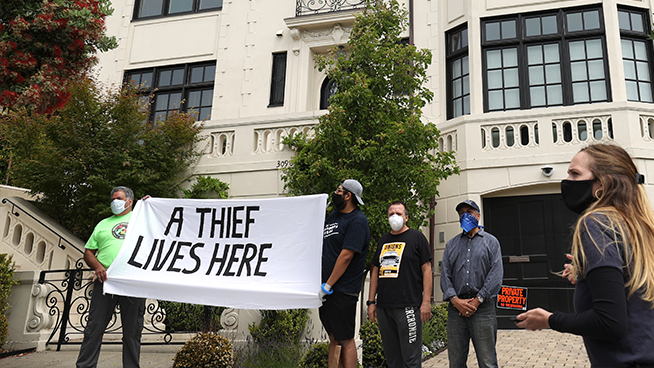 Protesters hold a banner during a demonstration in front of the home of Uber CEO Dara Khosrowshahi on June 24, 2020 in San Francisco, California. (Photo by Justin Sullivan/Getty Images)

Wednesday, California Labor Commissioner Lilia García-Brower filed a lawsuit against ridesharing apps Uber and Lyft for wage theft a day before Attorney General Xavier Becerra’s separate state lawsuit against the companies. This one-two punch is meant to signal that the state is backing drivers efforts to reclassify as employees and not independent contractors.

Last September measure AB5 was passed which codified drivers of these apps as actual employees. The change would allow rideshare drivers to receive benefits that these companies have shrugged off in the past, though this has created a fierce point of contention as employee benefits would likely add 30% to affected companies’ labor costs.

“Misclassifying your workers as ‘consultants’ or ‘independent contractors’ simply means you want your workers or taxpayers to foot the bill for obligations you have as an employer,” said Attorney General Becerra in a statement. “Whether it’s paying a legal wage or overtime, providing sick leave, or providing unemployment insurance. We’re seeking a court order to force Uber and Lyft to play by the rules.”

Since coming into effect on Jan 1st, 2020 AB5 has not been enforced and has resulted in many drivers organizing to force these companies into obeying the new law. However, companies like Uber and Lyft have struck back by saying many people on their platform depend on the flexibility the apps offer. These companies also are decrying the state’s efforts to crack down on the measure in a time when so many are out of work.

“The vast majority of California drivers want to work independently, and we’ve already made significant changes to our app to ensure that remains the case under state law,” Uber said in a statement. “When 3 million Californians are without a job, our leaders should be focused on creating work, not trying to shut down an entire industry.”

Uber, Lyft, DoorDash, Postmates and Instacart have collectively given $110 million to fund new legislation, Prop 22, to override AB5. The proposed ballot measure seeks to undo the changes to employment status while reconciling with the drivers by affording them some of the provisions in AB5 such as minimum guaranteed wages and new medical benefits for drivers who drive more than 15 hours a week. Though the campaign’s site did not specify exact details on potential new wage and medical benefits it did predict that if it did not pass that rideshare companies would only be able to hire 10% to 20% of their current staff full time.

“We believe the courts should let the voters decide,” said Lyft spokeswoman Julie Wood in a statement. “Trying to force drivers to give up their independence 100 days before the election threatens to put a million more people out of work at the worst possible time.” 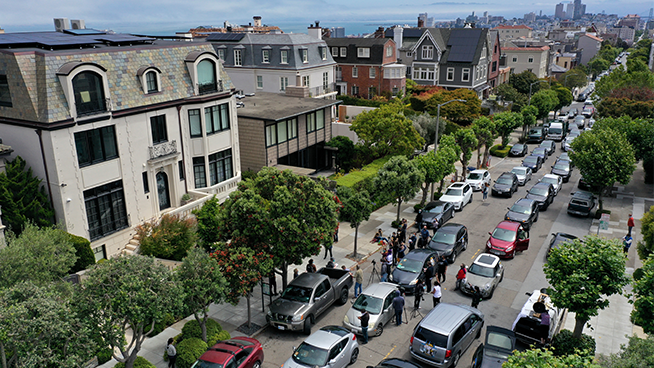 García-Brower’s lawsuit accuses Uber and Lyft of “committing wage theft by willfully misclassifying drivers as independent contractors instead of employees.” It seeks to enforce the provisions set out by AB5 to reclaim lost wages and assert labor rights afforded to the drivers under California law. Rideshare Drivers United predicted that Uber alone owes $1.35 billion in unpaid back wages.