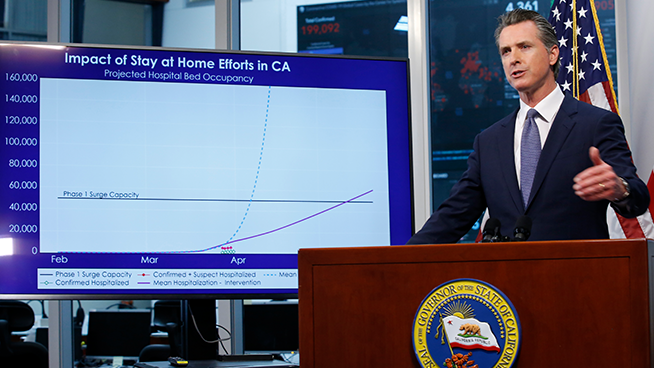 California has announced that “until further notice” it will stop moving counties on or off its COVID watchlist over a large surge of inaccurate data.

Reportedly 23 counties are currently experiencing problems with the accuracy of the data acquired through CalREDIE, also known as the California Reportable Disease Information Exchange. The confusion seemingly comes from the juncture between electronic laboratory reports coming in and them being routed into the data collection system.

“We just don’t know. We don’t know if or cases are rising, plateauing, or decreasing. We are very anxious for this issue to get resolved.” said Dr. Cody during a news conference.

Since then even more counties have come out as saying they are experiencing similar issues, Alameda, Napa, Santa Clara, and Sonoma counties included.

The state’s watchlist, set forth by Governor Gavin Newsom, is the tool that is used to determine what phase of reopening each county is allowed to operate in. This can mean the difference between socially distanced dining and a full lockdown.

With California recording a nation-high of 525,000 positive tests the timing could not be worse. However, this could also explain the state’s technical problem with its coronavirus testing database as massive numbers of case data flood in.

Even a small percentage in infection rates could mean thousands of cases, but in the last week rates took a nose dive and dropped almost two percent right as data inaccuracies became apparent. Daily cases have also dropped by more than 50% according to CalREDIE witch further leads credence to the idea that the state’s system is severely lagging.

“Back in February and March when we didn’t have enough testing, I would say we felt blind,” said Dr. Cody. “I would say now we’re back to feeling blind. We don’t know how the epidemic is trending.”

San Francisco has circumvented the problem since it’s public health officials don’t rely on state infrastructure to track data, instead, they receive that information directly from labs. However, the city is still experiencing some delays in test results as some labs only take 24-48 hours, but others take over a week, which renders contact tracing efforts null and void.

Even before data lags were publicly known the Bay Area and San Francisco were on edge as the numbers crept up and up. San Francisco’s Director of Public Health Dr. Grant Colfax warned in late July that poor preparedness and poor data could lead to a New-York level outbreak.

“We see that even sophisticated, well-resourced health systems like they have in New York City, when they get overwhelmed more people get sick and more people die,” said Dr. Colfax

“So when we talk about the curve and our surge, I’m very concerned that as cases increase, it’s plausible we could get in a New York-like situation in the late summer or early fall — that’s why everyone needs to do their part to flatten the curve,” he continued.

The state Department of Public Health says it is currently working to “assess the impact of the data issues on disease transmission metrics.”