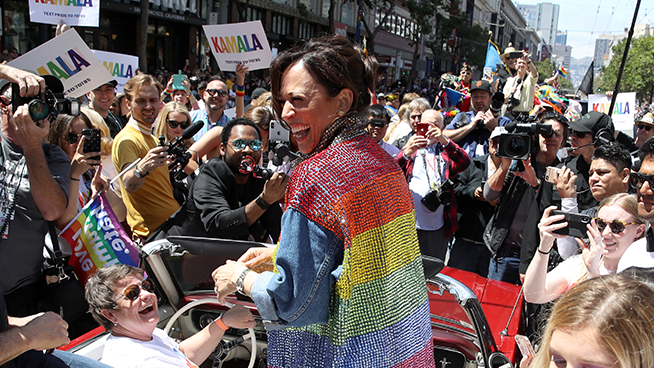 Sen. Kamala Harris  laughs as she rides in a car during the SF Pride Parade on June 30, 2019 in San Francisco, California.

The news broke after weeks of Biden putting off the important decision of selecting his pick for the Vice Presidency. Harris has deep roots in the Bay Area so it was no surprise when many local officials sent her their best.

“Hella proud,” the vehemently anti-Trump Oakland Mayor Libby Schaaf tweeted in celebration of the Oakland native. “Our country needs this fierce and compassionate woman in the White House. Now let’s fight like hell for a Biden-Harris win in Nov.”

Hella proud. Our country needs this fierce + compassionate woman in the White House. Now let’s fight like hell for a #BidenHarris win in Nov. pic.twitter.com/SnX2z8nsR5

I've long been proud to call @KamalaHarris a friend and a mentor—now I'm excited and ready to call her Vice-President!

Harris, born of Jamaican and Indian immigrants, first started her political career in law enforcement when served as California’s attorney general, and then as San Francisco district attorney before finally being elected to the Senate in 2016.

While Harris was in the presidential race she clashed with Biden during the primary debates. Both Biden and Harris have addressed their arguments and since she left the race, she has given her full support to the Biden campaign. She campaigned virtually for Biden, holding fundraisers and addressing causes such as racial disparities in the coronavirus pandemic.

Harris’ sister, local SF Supervisors and even Governor Newsom joined the party to give their congratulations.

So incredibly proud of you, sis!
❤️🤍💙 pic.twitter.com/sm4ctGCNPU

I first met @KamalaHarris in Iowa where we were both campaigning for Barack Obama. I worked for her campaign in 2010 when she ran for AG, she swore me into School Board, & she’s inspired me with her leadership as Senator. Let’s get this daughter of the Bay into the White House. pic.twitter.com/OWUwGQQj3V