Former Trump Chief of Staff for the Department of Homeland Security (DHS) Miles Taylor was featured in a video published Monday that levels serious claims against President Trump.

The video was an advertisement from the group Republican Voters Against Trump and features personal testimony from the ex DHS staffer about what it was like to work for Trump. In the video, Taylor claimed that Trump vindictively told FEMA to stop providing aid to Californians affected by recent wildfires.

“He told us to stop giving money to people who’s houses had burned down from a wildfire because he was so rageful that people in the state California didn’t support him and because politically it wasn’t a base for him,” said Taylor in the video.

California has seen some of it’s most devastating wildfire seasons in recorded history in just the last three years. The 2018 Mendocino Complex fire which burned 459,123 acres, the 2017 Thomas fires which burned 281,893 acres, and of course, the 2018 Camp fires which burned 153,336 acres, destroyed 18,804 buildings, caused $16.5 billion in damages and claimed 85 lives. In 2018 alone 6,188 fires burned throughout the state claiming over 1 million acres of land. 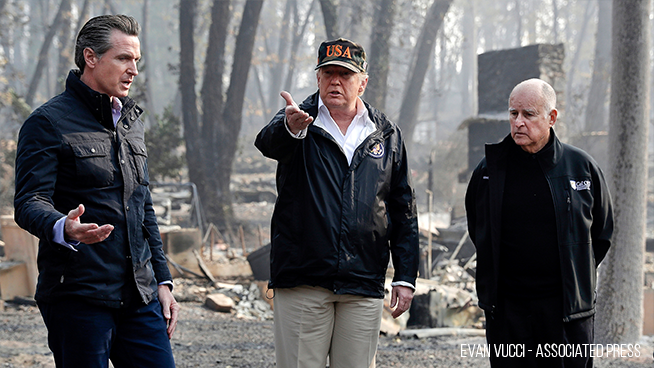 Nov. 17, 2018, President Donald Trump, center, talks with then Gov. Gavin Newsom during a visit to a neighborhood impacted by the wildfires in Paradise, Calif.

Trump has a history of targeting political opponents, especially from Democratic hubs like the Bay Area. Several times during his presidency Trump has personally attacked the city of Oakland, even recently saying that living there was “like living in hell.”

In 2020 Trump has grown more brazen in his distaste for liberal cities and even used the Department of Homeland Security to invade such cities claiming to crack down on crime in a way they refuse to. Disturbing images started appearing when Trump sent in DHS troops into notoriously liberal Portland who started violently beating peaceful protesters and snatching American citizens up in unmarked vans.

“The President wanted to exploit the Department of Homeland Security for his own political purposes and to fuel his own agenda,” said Taylor.

Though the video levels another claim about Trump’s use of the Department of Homeland Security. In the video, the former Chief of Staff for the DHS says that Trump wanted to not only reenact zero-tolerance policies at the border, but also to deliberately rip children away from parents as a lesson.

“He said he wanted to go further and have a deliberate policy of ripping children away from their parents to show those parents that they shouldn’t come to the border in the first place,” said Taylor. “A lot of the times the things he wanted to do not only were impossible but in many cases illegal.”

Despite the logistical, legal, and moral implications of this heavy-handed cruelty, Taylor claimed Trump felt unburdened by these excuses since he felt he had “magical authorities.”

Taylor concluded the video by stating that he himself is not a Democrat and in fact disagrees with Democrats as a whole, but pleaded that Trump cannot get a second term.

“People who are still serving in this administration have said to me, ‘just wait until the second term. It’ll be no-holds-barred, it’ll be shock and awe, we’ll do whatever we want,'” said Taylor. 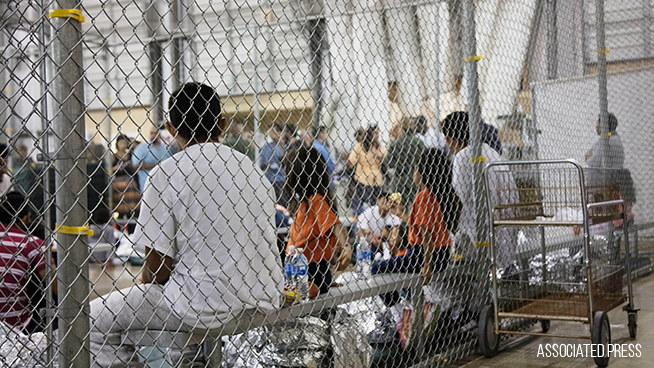 In this photo provided by U.S. Customs and Border Protection, people who’ve been taken into custody related to cases of illegal entry into the United States, sit in one of the cages at a facility in McAllen, Texas, Sunday, June 17, 2018. More than 2,300 minors have been separated from their parents since April, when the Trump administration launched its “zero-tolerance” policy that called for prosecuting illegal immigrants and taking their children away.

Recently Democrats have raised calls to dismantle the department that was erected by the Bush Administration as an anti-terrorism agency.  Even Richard A. Clarke, National Security Councilmember at the time of its inception, has grown to lament the agency.

“Trump has done far more damage to the DHS, however, than leaving it leaderless. He has branded it as the department that cages children, swoops innocent citizens off U.S. streets, sends warriors dressed for the apocalypse to deal with protests, hunts down hard-working people doing “essential jobs” to forcibly deport them, and harasses foreign students at leading universities,” Clarke wrote in an op-ed for the Washington Post. “The DHS has become synonymous with unsympathetic government overreach, malevolence, and dysfunction.”