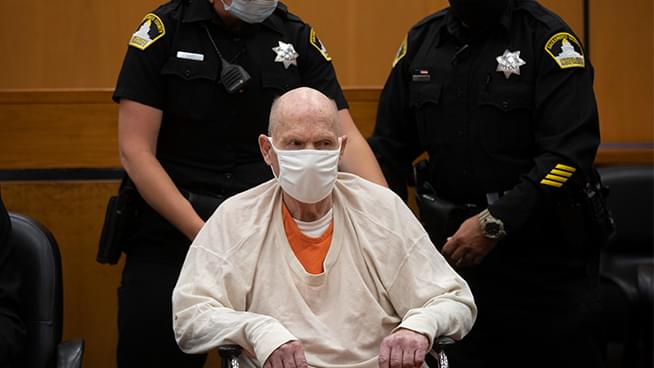 SACRAMENTO, CA – AUGUST 20: Joseph James DeAngelo in a wheelchair is brought out of the courtroom for a break in the schedule for the third day of victim impact statements at the Gordon D. Schaber Sacramento County Courthouse on Thursday, Aug. 20, 2020, in Sacramento, Calif. DeAngelo, 74, admitted being the infamous Golden State Killer. He will be formally sentenced to life in prison on Friday under a plea agreement that allows DeAngelo to avoid the death sentence. The former police officer in California eluded capture for four decades. He has admitted 13 murders and nearly 50 rapes between 1975 and 1986

Joseph James DeAngelo Jr., also known as the Golden State Killer, was sentenced to life without parole in a Sacramento court.

Judge Michael Bowman condemned DeAngelo to 11 consecutive life sentences without parole, plus eight years, and 15 other life sentences with the possibility of parole, the New York Daily News reported. Before he was officially sentenced, DeAngelo rose from his wheelchair briefly to speak. “I’ve listened to all your statements, each of them,” he said to the courtroom of his victim’s relatives. “And I’m truly sorry to everyone I’ve hurt.”

Joseph DeAngelo, 74, confessed to 13 murders, at least 50 rapes, and over 120 burglaries as he terrorized his victims in the 1970s and ’80s. As part of the deal, DeAngelo was spared the death penalty but had to register as a sex offender and compensate his victims and their surviving families. He was served “the absolute maximum” the court could possibly impose because as Bowman said, “The defendant deserves no mercy.”

“When a person commits monstrous acts they need to be locked away where they could never harm another innocent person,” Sacramento Superior Court Judge Michael Bowman said.
“Police finally caught DeAngelo, a former cop, in 2018 through DNA evidence that had been left at the decades-old crime scenes. Investigators searched an online genealogy database until they hit on a lead: DeAngelo’s relatives. Once police identified DeAngelo as a suspect, they used DNA that he’d left behind in a public area to confirm that he was indeed their man.” Vice reported.
In total, prosecutors said DeAngelo had confessed to hurting 87 people in 53 separate crimes, according to NBC News. The crime spree of the Golden State Killer, who was also sometimes known as the East Area Rapist or the Original Night Stalker, lasted 11 years, from 1975 to 1986.
The infamous killer, who eluded capture for more than 40 years, heard emotional victim impact statements describing the horror DeAngelo inflicted on their families during a weeklong sentence which concluded Friday.
Diane Howard, defense attorney said she hopes DeAngelo’s guilty plea provides “some peace” to the survivors and the families of his murder victims.

“He truly is an evil monster with no soul,” rape survivor Patricia Murphy said in a statement read by her daughter Tuesday.

A woman who lost her father and stepmom recalled finding her dad’s body with his head “cemented” to the pillow by “an ungodly amount of blood” following a 1980 killing in Ventura County.

“I was moved by their [victims and families members of victims] courage, their grace, their strength — all qualities you clearly lack,” Bowman told the defendant.

The cold-blooded killer, also dubbed the Visalia Ransacker and East Area Rapist, was known to wear a ski mask, bind some of his victims, and lay them down in front of TV sets. He would then turn the TV on and cover the screen with a towel “so he would have this glow, so he could see her,” authorities have said.

DeAngelo is known for also taking “trophies” from his victims’ homes, including pieces of jewelry like cuff links and rings, according to prosecutors.

“His horrific crimes are unspeakable and forever changed the lives of our victims,” Contra Costa County District Attorney Diana Becton said in a statement after the sentencing. “I want to underscore the strength our victims and their families displayed over the years, and their courage this week to share in open court with all of us the pain and agony they have endured over the years.”

“This has been a very long journey for justice…It has been said a journey of a thousand miles begins with a single step. For so many there is little doubt that this journey felt like a thousand miles.” Sacramento County District Attorney Anne Marie Schubert said during a press conference.

Schubert’s office led the prosecution of the case, providing her plenty of information to call DeAngelo “the real-life version of Hannibal Lecter,” a “sociopath,” and “master manipulator.”

“We now have moved this monster not simply from just being caught to now standing convicted,” Schubert said.

“The serious and the gravity of the offenses, the psychological harm, the pain, and the brutality of these offenses require nothing less than the imposition of the maximum sentence. The victims must be assured that Mr. DeAngelo will never, ever walk this Earth again as a free man,” said District Attorney Becton.