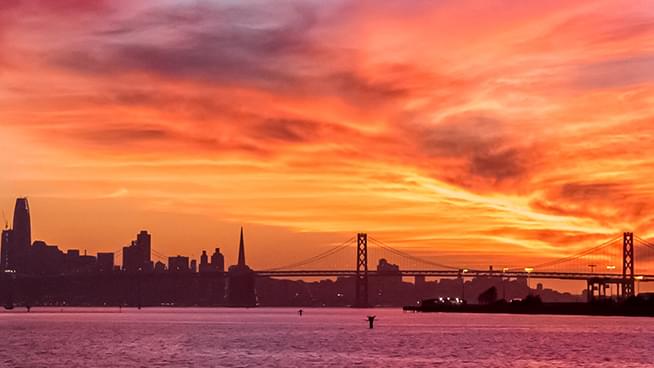 Added to the list of strange things to occur in 2020: orange skies. The entire Bay Area today is seeing bright orange and red skies instead of the typical fog and later sunny afternoon.

“The basic, simple explanation is that the smoke particles in the air scatter blue light. As you know particulate matter in the atmosphere determines how we see colors. I mean, you know, water droplets can make you see rainbows. So this particulate matter that’s up in the upper atmosphere with the smoke scatters blue light rays. So all we’re seeing is yellow and orange type hues and that’s why the sky looks the way it looks,” said Christian.

Although the color is shocking, the air quality is not as bad as some may assume.

Christian went on the say,

“I never have [seen anything like this] and I’ve covered massive fires before. I mean, back in my GMA days I covered the Oakland fires and the Malibu fires, and obviously now since I’ve been here in the Bay Area all these years I’ve covered the wildfires here. I’ve seen dark skies with an approaching tornado, I’ve seen black skies with a hurricane, but I’ve never seen anything like the way our sky looks today.

The skies will not last forever, Christian thinks the blue skies will return this weekend.

“By Friday or Saturday, we’re looking at enough of a shift in the pattern that some of this dirty smoke get may get blown out of the Bay Area. And if we get a good vigorous marine layer that that might bring some drizzle, which is a possibility overnight early morning drizzle that could cleanse the air a little bit, but I don’t think tomorrow is gonna look much better than today.”

Listen to Chip Franklin and Spencer Christian’s full conversation below.