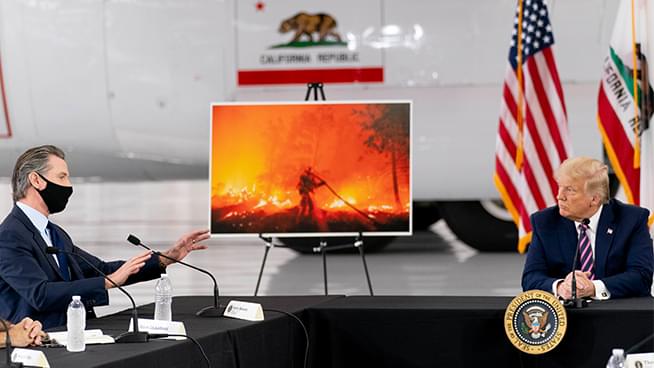 President Trump visited California on Monday to discuss the historic wildfires burning across California and to honor the California National Guard for rescuing 242 people from the Creek Fire on September 5, 2020.

Trump met Governor Newsom and other officials at McClellan Park, a former airbase outside Sacramento, to discuss the raging wildfires. A main point of discussion surrounding the fires was climate change, a need for people to take scientists’ opinions seriously, and what has to be done to protect the environment and those living in California.

Wade Crowfoot, the California secretary for Natural Resources, briefed the president about hitting record temperatures this summer and working with science to protect Californians.

“I wish science agreed with you,” replied Crowfoot.

Trump and Newsom both expressed their ongoing relationship and ability to work together despite political differences. However, both took stronger approaches when not face to face.

President Trump told reporters, “We need good, strong forest management, which I’ve been talking about for three years…We have the best people in the world looking at this.”

When asked if climate change was also a part of the issue Trump said, “I think some things are possible. I think a lot of things are possible,” before returning the idea of, “dried leaves and trees on the ground that are the biggest factors being the West Coast’s fire issue,” reported KTVU.

When speaking to reporters Trump remained firm the fires were a “management problem”.

In response to question from @1KatieOrr of @KQED, Trump differs sharply from @GavinNewsom — in insisting forest management, not climate change, is biggest problem in CA pic.twitter.com/c8OevKDU5x

While the governor’s office tweeted strong messages urging people to believe in climate change and the need from federal support.

The hots are getting hotter.

The dries are getting drier.

The evidence is all around us — climate change is REAL. pic.twitter.com/2Ww2THctTJ

Some people have criticized President Trump for taking three weeks to address the fires in California, but he reiterated that he has been in contact with Newsom.

Trump forcefully defend himself against critics who say he was too slow to respond and acknowledge California fires —a question from us that he called “nasty .” Also said he has a good relationship with ⁦@GavinNewsom⁩ pic.twitter.com/lorHQZoqKd

California asked for federal help so fires of this size do not happen again.

Much more federal funding is needed for the US Forest Service to meet this federal commitment of vegetation management. Emergency federal funding, beyond simply FEMA funding for wildfire response, is critical to protect more communities before next year’s fire season. pic.twitter.com/AtvAKZUdO9

— Office of the Governor of California (@CAgovernor) September 14, 2020