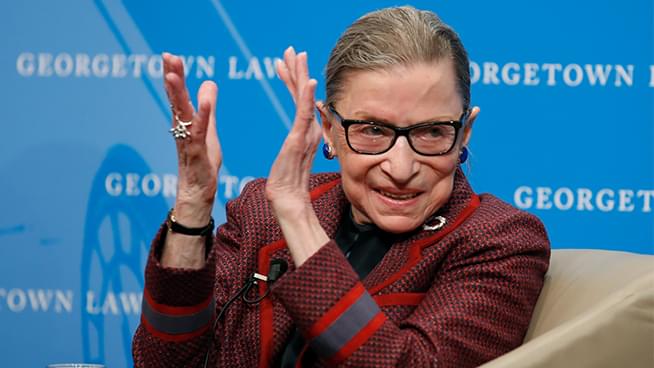 “Our nation has lost a justice of historic stature,” Chief Justice John Roberts said. “We at the Supreme Court have lost a cherished colleague. Today we mourn but with confidence that future generations will remember Ruth Bader Ginsburg as we knew her, a tired and resolute champion of justice.”

Just days before her death, as her strength waned, Ginsburg dictated this statement to her granddaughter Clara Spera:  “My most fervent wish is that I will not be replaced until a new president is installed,” reported NPR.

Ginsburg’s passing leaves her seat open with only weeks to go before the 2020 presidential election. Sources close to President Trump report he will put forth a nominee in the coming days, but the Democrats will try to postpone the decision.

In July, Ginsburg announced she was undergoing chemotherapy treatment for lesions on her liver, the latest of her several battles with cancer. She has faced five bouts with cancer beginning in 1999, falls that resulted in broken ribs, insertion of a stent to clear a blocked artery, and assorted other hospitalizations after she turned 75.

Ruth Bader Ginsburg, the court’s second female justice and one of nine women in her 1959 Harvard Law class of 500, was a diminutive yet towering women’s rights champion. She spent her final years on the bench as the unquestioned leader of the court’s liberal wing & became an icon to her admirers due to her landmarks cases throughout her career and remarks including, “I ask no favor for my sex. All I ask of our brethren is that they take their feet off our necks.”

Numerous figures have begun to share their condolences for this historic loss.

We have lost a giant among us. A trailblazer. And a champion of equality and justice.

Our hearts ache tonight. Let us honor her memory by preserving the very ideals she fought so tirelessly for.

Ruth Bader Ginsburg lived an incredible life, breaking barriers and delivering justice. Her passing is a devastating loss for our country. We can honor her life by continuing to fight for a more just society.

Ruth Bader Ginsburg was among our nation’s greatest jurists, a tireless defender of all Americans’ rights. Her sharp mind, her deep understanding of and love for the law, and her dedication to justice and equality made America a better place. (1/2)