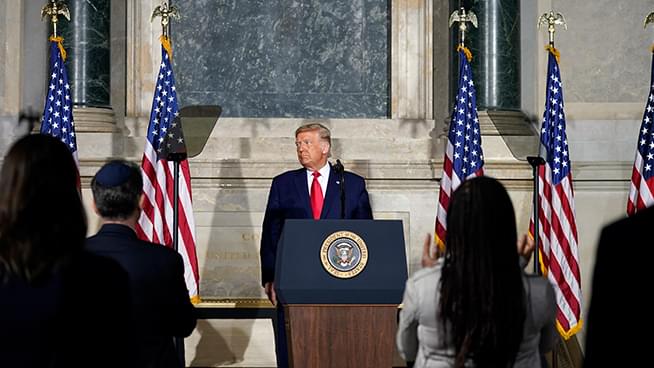 President Donald Trump’s attacks on the “left-wing demonstrators” and “far-left mobs” continued Thursday as he spoke at the National Archives Museum.

Trump accused schools across America teaching students “hateful lies about this country” and announced he would be taking steps to “restore patriotic education” with the creation of a grant to develop a “pro-American curriculum.”

“Our heroes will never be forgotten…Our youth will be taught to love America,” explained Trump.

While Trump views himself as an American defender, many others, including District Attorney of San Francisco Chesa Boudin disagree.

This is what the rise of fascism looks like. Literally, this is it, happening here, every day, bit by bit.

We. Must. STOP. trump. NOW. https://t.co/uRfWduklxB

The event, held on Constitution Day, is the anniversary of the document’s signing in 1787. Trump claimed it reflected “centuries of tradition, wisdom and experience.”

“Yet as we gather this afternoon, a radical movement is attempting to demolish this treasured and precious inheritance,” he added.

During the event, Trump said, “Today, I am also pleased to announce that I will soon sign an Executive Order establishing a national commission to promote patriotic education. It will be called the ‘1776 Commission.’ It will encourage our educators to teach our children about the miracle of American history and make plans to honor the 250th anniversary of our founding. Think of that — 250 years.”

The 1776 Commission is believed to be a dig at the Pulitzer Prize-winning 1619 Project which is “an ongoing initiative from The New York Times Magazine that began in August 2019, the 400th anniversary of the beginning of American slavery. It aims to reframe the country’s history by placing the consequences of slavery and the contributions of black Americans at the very center of our national narrative.”

Trump also referred to the June removal of Caesar Rodney’s statue in Presidential nominee Joe Biden’s hometown, Wilmington, Delaware. Rodney was a Delaware delegate who rode over 70 miles on horseback to Philadephia so he could cast a tie-breaking vote for independence before the signing of the Declaration of Independence in 1776, all while he was suffering from cancer.

He slammed Biden saying, “Joe Biden said nothing as to his home state’s history and the fact that it was dismantled and dismembered…Today America will give this founding father, this very brave man who was so horribly treated, the place of honor he deserves.”

Biden has not responded to Trump’s remarks, but is known to have expressed the need for racial reform in America.

Trump disagrees stating, “Critical race theory is being forced into our children’s schools, it’s being imposed into workplace trainings, and it’s being deployed to rip apart friends, neighbors and families.”

“Teaching this horrible doctrine to our children is a form of child abuse, the truest sense,” continued Trump. “For many years now, the radicals have mistaken Americans’ silence for weakness. They’re wrong. There is no more powerful force than a parent’s love for their children. And patriotic moms and dads are going to demand that their children are no longer fed hateful lies about this country.”

The White House did not say when Trump would sign the executive order. Following the president’s remarks, the phrases “Trump Youth” and “Hitler Youth” began trending on Twitter, comparing the president’s new education project to the indoctrination of young people in Nazi Germany.