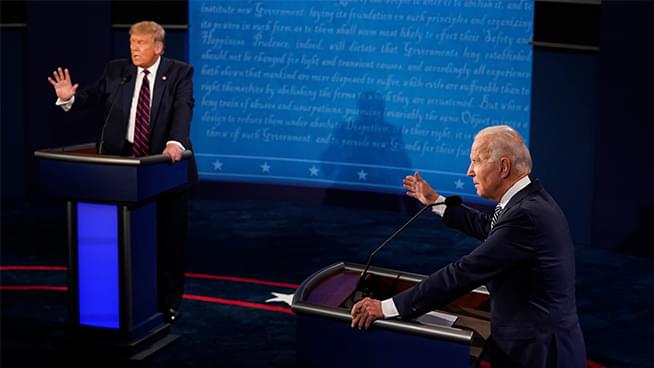 President Trump and former Vice President Joe Biden had their first presidential debate in Cleveland, Ohio Tuesday night. Chris Wallace, the moderator of the evening had trouble stopping both participants, mostly President Donald trump, from interrupting and following debate guidelines explained at the beginning of the event.

Tonight, @JoeBiden showed the nation what an empathetic, honest, decent leader looks like.

In addition, Newsom commented on Trump’s disbelief of climate change.

“Big problems demand bold solutions. We’re in the midst of a climate crisis. We’re not waiting around for the federal government. So yes, by 2035 every new car sold in CA will be an emission free vehicle. It’s simple–cars shouldn’t give our kids asthma or make wildfires worse.” Tweeted Newsom.

We cannot afford to leave a single moment—or a single vote—to chance over the next 35 days. Make a plan to vote, and vote early if you can. Visit https://t.co/MykJL0X5gt for voting information in your state.

Trump is running against the election itself.

His goal isn’t to beat Biden, it’s to undermine the entire legitimacy of the election, so he can steal it.

Haney also tweeted a video of President Trump’s response to his infamous tax returns and the New York Times most recent claim that Trump only paid $750 in taxes.

Best moment of the night. https://t.co/u87pdRYtrD

San José Mayor Sam Liccardo retweeted his media contact, Chloe Meyere, stating, “Idea for the next debate: off buttons for mics” in response to President Trump’s repeated interruptions even after moderator Chris Wallace asked him to wait his turn.

Liccardo also retweeted the 28th Mayor of Long Beach City, Robert Garcia, “Listening to our President downplay this pandemic which killed both my parents is…infuriating.”

San Francisco Mayor London Breed has yet to comment on tonight’s debate.