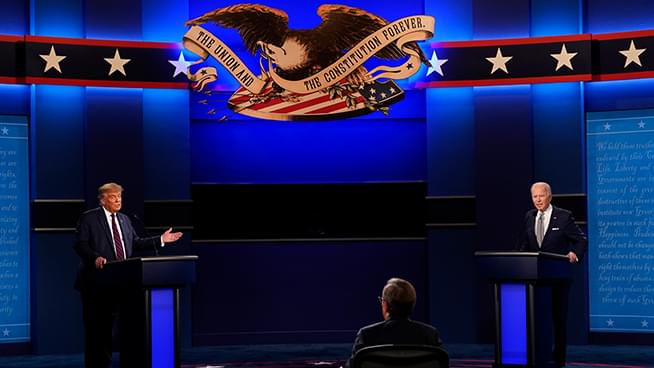 The first debate between Trump and Biden deteriorated into bitter taunts and near chaos. Trump in particular repeatedly interrupted his opponent with angry — and personal — comments that sometimes overshadowed the sharply different visions each man has of a nation facing historic crises. There were heated clashes over the president’s handling of the pandemic, the integrity of the election results, deeply personal attacks about Biden’s family and how the Supreme Court will shape the future of the nation’s health care. Trump also refused to condemn white supremacists who have supported him, telling one such group known as Proud Boys to “stand back and stand by,” reported AP News.

It was “Chaos in Cleveland.”
That’s how the first presidential debate will be remembered — a disorganized dogfight between Joe Biden and a defensive Donald Trump, who repeatedly refused to abide by the rules of moderator Chris Wallace. #Debate2020

“Chaos in Cleveland” may be an understatement as moderator Chris Wallace had to remind both participants of the guidelines multiple times.

In tonight’s #debate2020 the moderator pleaded with President Trump to please follow the outline and rules of the debate.

“I think the country would be better served if we allowed both people to speak with fewer interruptions.” pic.twitter.com/7um9UogpFl

To start the debate, Wallace acknowledged Trump and Biden’s differing approaches of replacing Supreme Court Justice Ruth Bader Ginsburg and asked both candidates why their arguments are valid.

The conversation unravelled quickly as, “Trump says he has a constitutional duty as president to fill the open position, while Biden says Trump’s administration and Senate Republicans are trying to jam through a nominee before the election. Trump said his nomination of Amy Coney Barrett is valid because the White House and the Senate are under Republican control, and the elections that gave them control have consequences. adding that he nominated a competent nominee,” reported NBC.

Biden stated Americans should have their say in this election, explaining he has no issues with Barrett and instead has a problem with the way Republicans are attempting to nominate her.

Biden and Trump did not see eye to eye in regards to the coronavirus pandemic. Biden state over 200,000 Americans have died equating to 20% of deaths worldwide even thought the United States makes up 4% of the world’s population.

Trump stayed firm stating he did a good job with the vires and it’s time to reopen the economy.

Biden reminded the audience Trump said the coronavirus would disappear by Easter, which was over 4 months ago.

Joe Biden and Donald Trump on why they should be elected president over their opponent #Debate2020 pic.twitter.com/Us0w3H1cBL

Trump claimed he’s paid millions in taxes in response to his infamous tax returns and the New York Times most recent claim that he only paid $750 in taxes.

Why Should Voters Elect You? Plus Climate Change

While Trump thinks he should be reelected because, “There has never been an administration or president who has done more than I’ve done in a period of three and a half years.”

Joe Biden and Donald Trump on why they should be elected president over their opponent #Debate2020 pic.twitter.com/Us0w3H1cBL

Climate change was addressed, to which Trump had strong remarks about the ongoing California wildfires.

“Every year I get the call, ‘California is burning.’ If you had good forest management, you wouldn’t be getting those calls.

Wallace’s final question asked both candidates if they would accept the results of the election and urge their supporters to as well.

Trump did not say yes and instead urged his supporters to go to polling places and “watch closely” for irregularities and explained he couldn’t tell them to stand down if they saw issues.

The Vice Presidential Debate will see Kamala Harris and Mike Pence on October 7th at The University of Utah in Salt Lake City, Utah.