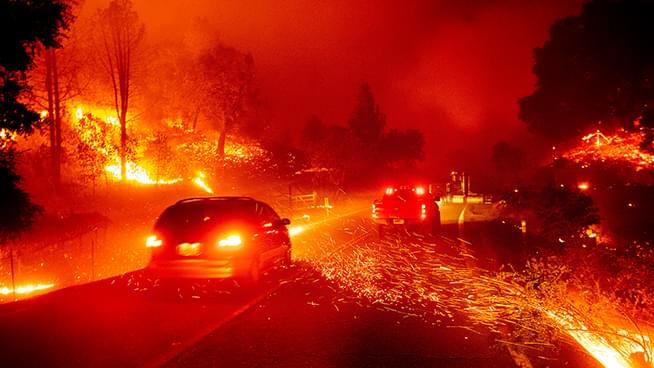 70,000 people in Napa and Sonoma counties, including the entire city of Calistoga, have faced mandatory evacuations due to the raging Glass Fire. The fire is 0% contained and threatens 10,712 structures according to Cal Fire’s latest update.

Governor Newsom declared a state of emergency in Napa, Sonoma and Shasta counties and sent a letter to President Trump asking him to declare a “major disaster” that would send fire assistance grants into the state.

Yesterday, I surveyed damage from the Glass Fire and met with some of the folks impacted.

A State of Emergency has now been declared in Napa, Sonoma, and Shasta. If you’re in the area please stay safe and heed all warnings from your local officials. https://t.co/u3SibvWVnV

Referencing Trump’s visit this month to McClellan Air Force Base, Newsom wrote: “Unfortunately, as you witnessed during your visit, California is experiencing another siege of fires from early September, which continue to devastate communities throughout the State.”

“The state of emergency across the three counties authorizes California agencies to direct all equipment, buildings and employees toward emergency services. It also requires residents to “obey the direction of emergency officials,” to protect their safety,” reported the SF Chronicle.

Cal Fire reported thousands of firefighters are working to contain these aggressive fires.

Today over 18,700 firefighters continue to battle 27 major wildfires in California. The latest numbers on all active wildland fires at: https://t.co/6s2QmGvwFi pic.twitter.com/jC2HULrBxF

The fires are devastating for residents as they leave their homes unsure of what they will return too. One man has evacuated three times in the last three years.

Cal Fire reported that since the beginning of the year, there have been over 8,100 wildfires that have burned well over 3.8 million acres in California.