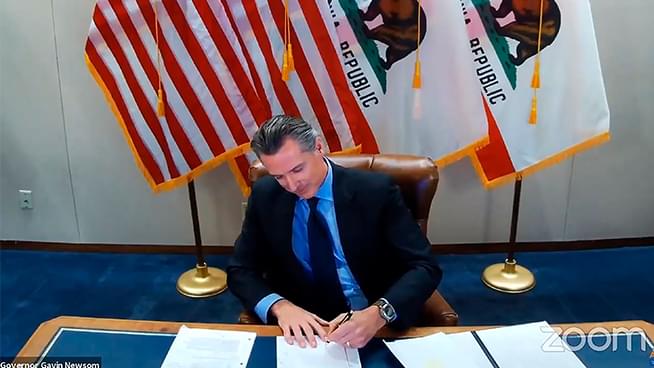 Office of the Governor via AP Images

California became the first state government in the country to adopt a law to study and develop proposals for potential reparations to descendants of enslaved people and those impacted by slavery on Wednesday.

CA just became the first state in the nation to mandate the study and development of proposals for reparations.

Our past is one of slavery, racism, and injustice. Our systems were built to oppress people of color.

It’s past time we acknowledge that. https://t.co/sY8UWffqzt

California will develop detailed proposals for granting reparations to Black Americans under a new law. The law establishes a nine-member task force to come up with a plan for how the state could give reparations to Black Americans, what form those reparations might take and who would be eligible to receive them. The task force must give its recommendations to the state Legislature one year after its first meeting. The law would not limit the reparations to slavery. But it does require the task force to give special consideration for black people who are descendants of slaves. Similar proposals have been introduced in Congress for decades but have never passed, reports AP News.

“This is not just about California, this is about making an impact, and a dent, across the rest of the country,” Newsom said moments after signing the bill during a ceremony broadcast on his YouTube channel.

Newsom explained the law and bipartisan support for its passage is proving “a paradigm that we hope will be resonant all across the United States.”

“In a year of national protests against racial injustice, state lawmakers approved Assembly Bill 3121 to force the state to begin to confront its racist history and systemic disparities that persist today. Although California entered the Union as a “free state” in 1850, slavery continued there after the state Constitution outlawed it the previous year, reported LA Times.

“California has come to terms with many of its issues, but it has yet to come to terms with its role in slavery…We’re talking about really addressing the issues of justice and fairness in this country that we have to address.” Said Assemblywoman Shirley Weber (D-San Diego), the author of AB 3121.

In 2019, Newsom apologized to Native Americans for a history of “violence, maltreatment and neglect,” which included slavery and genocide. Furthermore, he developed a Truth and Healing Council to correct the historical record about the state’s treatment of Indigenous people and discuss potential reparations.

As there are numerous ways to begin the state’s reparations, the LA Times reported scholar Henry Louis Gates Jr. said a similar agreed-upon set of facts about the treatment of Black people and an apology would be a good start.

“I think that this whole notion of truth and reconciliation needs to begin with some recognition of some responsibility and accountability here and until you have that, you can’t really talk about sort of any meaningful kinds of reparations,” scholar Henry Louis Gates Jr. said.