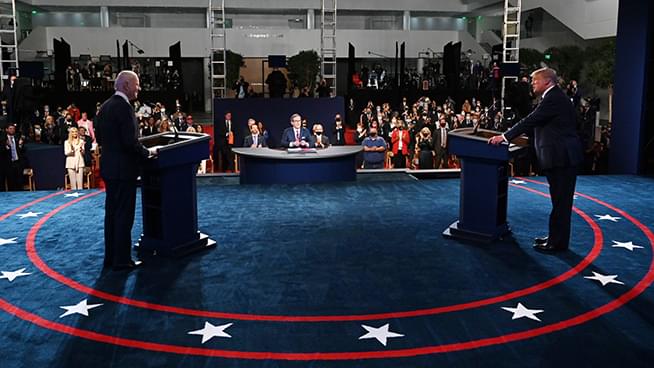 The Commission on Presidential Debates announced Wednesday it is carefully considering format changes for the remaining debates after President Trump repeatedly ignored the rules, resulting in a chaotic debate lacking in policy conversation.

“Last night’s debate made clear that additional structure should be added to the format of the remaining debates to ensure a more orderly discussion of the issues,” the CPD said in a statement. “The CPD will be carefully considering the changes that it will adopt and will announce those measures shortly.”

Chris Wallace, Tuesday’s moderator and Fox News host, was criticized for having difficulty enforcing guidelines and stopping participants from speaking out of turn, but the CPD thanked Wallace for his work.

“The Commission is grateful to Chris Wallace for the professionalism and skill he brought to last night’s debate and intends to ensure that additional tools to maintain order are in place for the remaining debates,” they said.

The debate was divided into six 15-minute segments focusing on: The Supreme Court, The Coronavirus Pandemic, Race, The Economy, Why Should Voters Elect You? Plus Climate Change and Election Integrity.

Each candidate was given two minutes to answer the questions presented and allowed opportunity to respond to each other. However, Trump continuously cut into Biden’s two minutes causing chaos and confusion. Wallace asked Trump to stop interrupting, but he did not enticing Biden to ask the president, “Will you shut up, man?”

In tonight’s #debate2020 the moderator pleaded with President Trump to please follow the outline and rules of the debate.

“I think the country would be better served if we allowed both people to speak with fewer interruptions.” pic.twitter.com/7um9UogpFl

The CPD works with both candidates ahead of the debates to arrive at an agreed-upon set of rules. Changing the structure of the debates last-minute is highly unusual and a testament to just how out of control Tuesday night’s event was, reported NBC.

Political figures called the night “Chaos in Cleveland” and requested the ability to cut microphones when it is not the persons turn to speak.

“It’s been an interesting hour and a half,” Wallace said at the end.