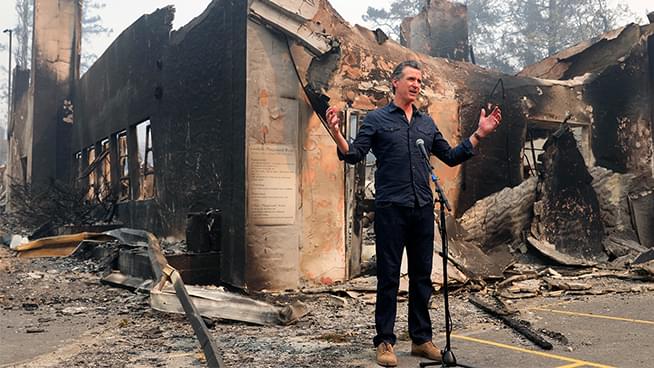 Newsom held a press conference at an elementary school in St. Helena stating he was visiting “another disaster.” The visit occurred after he announced a state of emergency for Napa, Sonoma and Shasta counties on Wednesday.

The Glass Fire has grown to over 56,700 acres and is 5% contained. 68,000 people have been evacuated, 26,623 structures are threatened and more than 100 homes and several wineries and landmarks have been destroyed.

Surveying the damage of the #GlassFire today.

Heartbreaking to see the devastation that this fire has caused. Immensely grateful for the firefighters and first responders that have tirelessly fought to keep this community safe. pic.twitter.com/lneGQMxpIv

“I’ve got four young kids in elementary school. I can’t imagine for the kids, the families seeing these images, what’s going through your mind,” Newsom said. “We’re in it for the long haul. We’re not just here for a moment. We have your backs and we’re very sorry you’re going through all this.”

Mandatory evacuations have been in effect since Monday.

Wednesday night, DC10’s and helicopters dropped retardent and water on the ongoing fire. More firefighters were brought in from across California in attempt to take on Thursday’s weather.

A Cal Fire helicopter drops water on a brushfire near Oakville Grade Rd. north of Yountville.