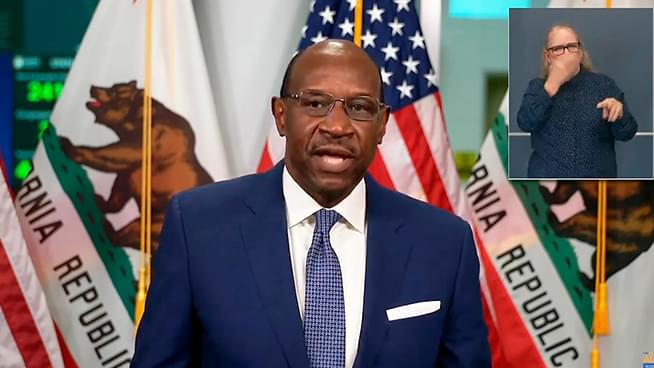 Office of the Governor via AP

“Justice Jenkins is widely respected among lawyers and jurists, active in his Oakland community and his faith, and is a decent man to his core,” Newsom said in a statement. “As a critical member of my senior leadership team, I’ve seen firsthand that Justice Jenkins possesses brilliance and humility in equal measure. The people of California could not ask for a better jurist or kinder person to take on this important responsibility.”

Jenkins has been considered for the state’s highest court for years, but was not chosen by former Governor Jerry Brown.

“I am truly humbled and honored to be asked by the governor to continue serving the people of California on the Supreme Court,” Jenkins said in a statement. “If confirmed, I will serve with the highest ethical standards that have guided me throughout my career, informed by the law and what I understand to be fair and just.”

He will be the first openly gay CA Supreme Court justice & only the 3rd African American man to serve on the state’s highest court. #CaliforniaForAll pic.twitter.com/q07dxct6Lg

— Office of the Governor of California (@CAgovernor) October 5, 2020

“Marty Jenkins brings an extraordinary amount of trial court and appellate experience to this position, with a deep sense of humility and character,” said retired California Supreme Court Associate Justice Carlos R. Moreno in a statement released by the governor’s office. “He understands the importance of having diverse voices in the judiciary.”

Jenkins would replace Justice Ming W. Chin, who retired at the end of August. Jenkins is a former federal civil rights attorney who prosecuted cross burnings and police misconduct cases under President Ronald Reagan. He was appointed by Republicans and Democrats to four different judgeships, reported AP News.

Oakland mayor Libby Schaaf, along with others, took to Twitter to express their support in Newsom’s choice.

A historic day for love, justice + equality. The nomination of Oaklander Justice Marty Jenkins, the first openly gay African American man to serve on the state Supreme Court, is another step toward a more just CA.https://t.co/91CRvWgiSQ

Justice Jenkins — a Black gay man — is superbly qualified to serve & will make our community proud.

Thank you to Governor @GavinNewsom for appointing Martin “Marty” Jenkins to the California Supreme Court — the first openly gay justice to sit on our state’s highest court. 🏳️‍🌈

We applaud @CAgovernor @GavinNewsom‘s appointment of Martin Jenkins to the California Supreme Court.

Jenkins will be the FIRST openly #LGBTQ+ person to serve on our state’s highest court!https://t.co/IHp1ADnoay