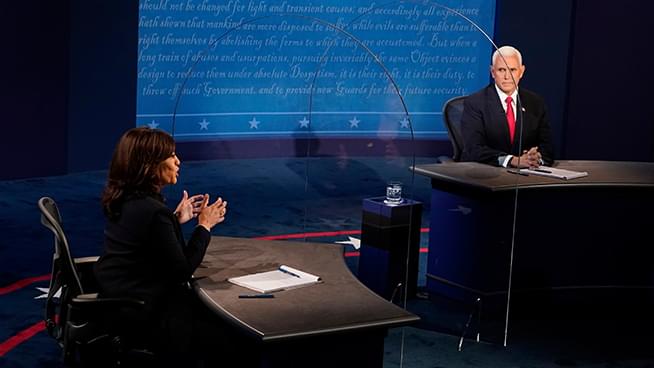 There were three participants in Wednesday night’s vice presidential debate: Republican Mike Pence, Democrat Kamala Harris and the plexiglass between them.

Each candidate had a clear partition on the side of the desk that faced the other, and the candidates were spaced more than 12 feet apart. Other pandemic-friendly changes included audience chairs spaced roughly 6 feet apart and requirements that everyone entering the hall test negative for the virus and wear a mask. If any guest refused to wear a face mask would be asked to leave, reported Kathleen Ronayne and J. David Ake from AP News.

The debate was the only meeting between the two vice presidential contenders and came after President Donald Trump was diagnosed with the coronavirus last week.

COVID-19 guidelines have not been announced for President Donald Trump’s and former Vice President Joe Biden’s second debate next Thursday on October 15, 2020. The debate will be in the form of a town meeting, in which the questions will be posed by citizens from the South Florida area.