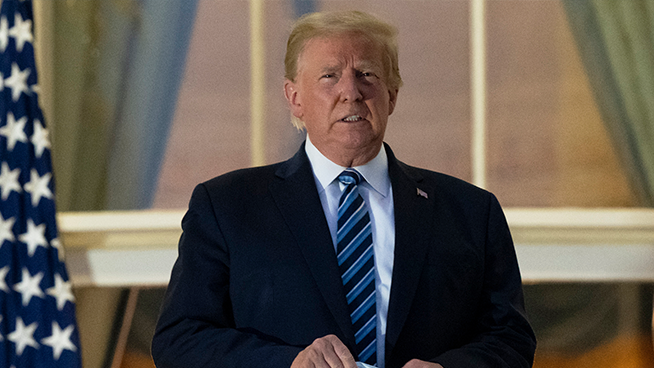 In an interview with Fox News’ Sean Hannity, President Trump went on a very strange rant to call out Joe Biden, the Democrats’ Green New Deal, and the state of California.

Though the president is presumed still sick with COVID-19 and the White House will not confirm when his last negative test was, he has made several attempts to hit the campaign trail as normal. However, President Trump’s sudden ejection from Walter Reed hospital on Monday has some medical professionals worried. The president who feels “20 years younger” and is seemingly peppier than ever, is likely feeling a boost of energy due to the steroids he has taken to help combat COVID-19. Though Trump appears to be better, his interviews and rants on Twitter seem to be stranger now, even for him.

Just five days after his release, his cognitive health and acuity were again put into question after he started making strange remarks about Democrats wanting to make windows so tiny so you couldn’t see out of them and claiming California had a water shortage because it had dumped millions of gallons of water into the Pacific Ocean to save tiny fish who needed water.

The strangeness began when Hannity asked about the Green New Deal, a proposal by progressive Democrats to overhaul our economy with renewable energy at the center.

“I mean, they literally want to take buildings down and rebuild them with tiny little windows. OK, little windows, so you can’t see, you can’t see the light,” said Trump when musing over a right-wing think tank’s estimate of $93 trillion cost to implement the Green New Deal.

The President went on to bemoan Joe Biden, Bernie Sanders and Senator Alexandria Ocasio-Cortez further by saying their plan would sink the American economy and plunge the United States into “a ninth world country” due to thinking a commitment to renewable resources would mean there would be no energy.

“Look at what’s happening with the rolling blackouts in California. Look at where California is going to have to ration water. You know why? Because they send millions of gallons of water out to sea out to the Pacific, because they want to take care of certain little tiny fish that aren’t doing very well without water,” Trump continued.

It can be assumed that Trump is referring to the delta smelt which has been a point of contention as California as experienced severe droughts in the last 10 years. The state was criticized for prioritizing the protection of this endangered species over its people since several times it was the reason for not diverting water to the Central Valley and Southern California.

However, 70% of California’s water originates from the north, while 70% of it’s consumption lies in the south, making the delta smelt’s plummeting numbers a canary in the coal mine when talking about droughts and local water management. Their short lifespans almost directly correlate to changes in California’s water systems and thus garner value greater than just the moral obligation to protect wildlife. Though during the height of the drought in 2015 the fish became a symbol of erroneous virtue signaling for some as millions of people suffered. A symbol that Trump wielded on Friday along with further criticism of the state’s forest management.

"Number one, [California] should let water come down from the north, and accept it instead of throwing it out to the Pacific. But you always have to have forest management" — Trump's climate change plan (Hannity doesn't seem to know how to respond to this) pic.twitter.com/1Y3ej5Vy3A

“You should let water come down from the north and accept it instead of throwing it out to the Pacific. But you also have to have forest management. We send them so much money. I don’t have to, but I want to help California,” said President Trump. “But they have the biggest forest fires because they don’t manage their land. They don’t have separators. They have trees that have been laying on the ground that are stone-cold, dead dry, like matchsticks.”

Trump is also famous for saying he “doesn’t think science knows” when evidence conflicting his own of the origins of wildfires in California was presented to him at a meeting with Governor Gavin Newsom and other top science officials. The President, who has been accused of withholding federal aid as a punishment to liberal California, is also a consistent denier of science which had garnered him sharp criticism as the country seeks to unite and fight back the deadly coronavirus.

The World Health Organization lists psychological effects (mood swings, memory issues, confusion or irritation) as a strictly long term effect of one of the steroids, Dexamethasone, that the President is on. And though Trump, to our knowledge, has only been on the steroid for one week, it has not stopped the connection being made in an attempted to explain his more recent erratic behavior.