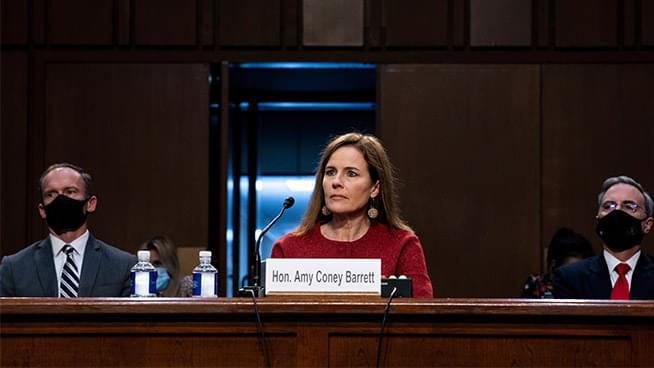 President Trump nominated Judge Amy Coney Barrett to replace Supreme Court Justice Ruth Bader Ginsburg. RBG told her granddaughter her “most fervent wish is that I will not be replaced until a new president is installed”. Ignoring her wishes, Barrett’s hearings are happening now and the KGO hosts have a lot to say about it. Listen below to hear Nikki Medoro, Mark Thompson, Pat Thurston, Chip Franklin and John Rothmann analyze Amy Coney Barrett’s SCOTUS hearings.

John Rothmann discusses the confirmation hearing of Judge Barrett. He asks how it is possible that she will not affirm the principle of a peaceful transition.

Chip explains “If a judge is to apply the law as “it is written,” then why do they call it an “opinion?’ Of course it matters that Barrett’s “opinions” violate the 1973 Roe V Wade decision and the law. She’s a theocrat. She’s nuts.”

ABC News Anchor Andy Field joins Chip Franklin to share what you will and won’t hear at confirmation hearings.

Chip talks to one caller about their opinion on why she’s troubled at the prospect of Barrett’s confirmation to the SCOTUS.