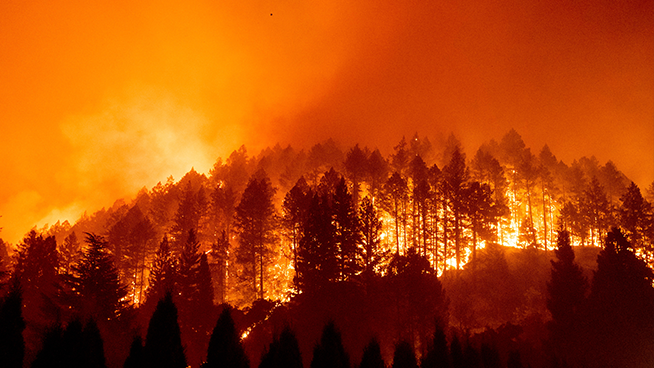 The Trump administration has recalled its earlier rejection of a late September request for federal aid for six major fires in California as several large fire complexes continue to burn.

Gavin Newsom announced Friday afternoon that a phone call with the president has reversed his thinking on aiding historic wildfires in the state of California.

“Just got off phone with Donald Trump who has approved our Major Disaster Declaration request. Grateful for his quick response,” Newsom Tweeted.

The request for a Major Disaster Declaration would further federal help to clean up and rebuild areas struck by a wildfire season that has burned double the area of any previous year on record. California’s 2020 fire season has seen more than 4.1 million acres burned, an area larger than the state of Connecticut, nearly 30,000 structures destroyed, and caused 31 deaths. Included in the recently rejected – then approved – request were funds to help fight the Los Angeles County’s Bobcat fire (116,000 acres), San Bernardino County’s El Dorado fire (23,000 acres), and Fresno’s Creek fire (344,000 acres).

Despite the record-setting fire season the federal government initially denied Governor Gavin Newsom’s request for further aid sighting that they had already allocated federal resources to the state and that the current magnitude of the ongoing disaster was insufficient for further aid.

“The damage assessments conducted with state and local partners determined that the early September fires were not of such severity and magnitude to exceed the combined capabilities of the state, affected local governments, voluntary agencies, and other responding federal agencies,” FEMA officials said in a statement Thursday night.

“FEMA approved four Fire Management Assistance Grants in five counties for wildfires included in the state’s disaster request, allowing reimbursement to state, local governments and other eligible agencies for 75% of firefighting, evacuation and sheltering costs. These grants will deliver millions of dollars of assistance for emergency expenses and funds to help reduce the risks of future disasters. If the state identifies additional information to support the request, it may appeal the decision within 30 days,” the statement continued.

Newsom tweeted out his own statement earlier this morning that the state did plan to contest the decision and his amicable relationship with the President seemed to pay off in its reversal.

California is already facing a $54.3 billion deficit from the economic effects of COVID-19 and early estimates put wildfire damages around $264,289,200, which are likely to increase.

“The true cost won’t be known for months or years afterward,” said Brian Ferguson, the media director for the Office of Emergency Services. “What the state is looking for is the highest level of federal support, which requires the highest bars be cleared. But we feel our case for those requirements has been met.”

Though the state has been approved for previous FEMA aid for previous 2020 fires, including the August Complex fire which accounts for 25% of acres burned this year, Trump has on several occasions heavily criticized the state’s ability to manage its lands. The President has several times in the past warned that he would deny federal aid if the state did not “sweep” their forest floors. However, out of the 101,676,000 acres in California, 47,797,533 (47%) belong to and is run by federal agencies.

Cal Fire along with federal and local help currently have 9,000 firefighters battling 20 fires across the state.

Just got off phone with @realDonaldTrump who has approved our Major Disaster Declaration request.

Grateful for his quick response. https://t.co/rF7VFqSENl