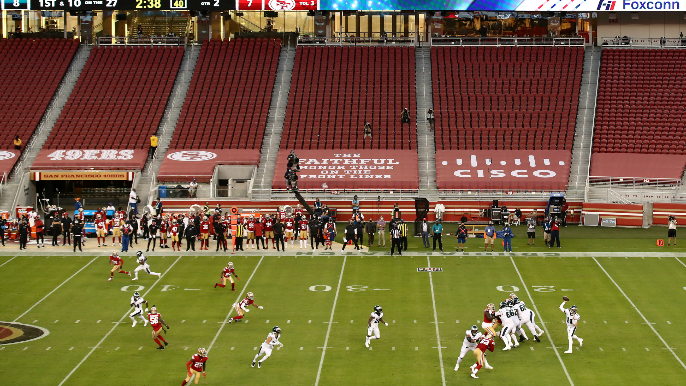 That was essentially the message from Santa Clara County, home of both the San Francisco 49ers and San Jose Earthquakes, immediately after California Governor Gavin Newsom gave the okay for fans to return to professional sporting events in the state.

Though given the okay by the state, nothing regarding fans returning can move forward without approval from the county as well, and that’s not something the 49ers or Earthquakes are going to get anytime soon.

“Audiences at professional sporting events will not be allowed anytime soon in Santa Clara County, and theme parks will not resume operation,” the Santa Clara County Public Health Department said in a statement roughly an hour after the state’s announcement. “We must all continue to prioritize reducing the spread of COVID-19, creating conditions that will allow our businesses, schools, and other community organizations to operate safely.

“As we see COVID-19 rates rising in states across the U.S., and as we enter the winter months when risk will increase, we cannot take chances with the health and well being of our community and forfeit the many sacrifices that have been made to slow the spread of COVID-19.”

Taken at face value, the county’s statement would seem to indicate that fans returning to Levi’s Stadium in 2020 is a remote possibility, considering the NFL season ends in early January. It also means that the 49ers’ statement that mentioned working with the county to implement a plan for the return of fans, might take quite awhile.

Santa Clara County is considered an “orange tier” county (moderate risk) based on their number of coronavirus cases, meaning that with the county’s approval they could open up Levi’s at a maximum of 20 percent of normal capacity, which equates to around 13,700 tickets.

Should the county allow for fans to return, only to customers within a 120-mile radius of the stadium would be allowed to buy tickets. Tailgating would be prohibited and face coverings would be required.

The 49ers next home game is scheduled for Nov. 5 vs. the Green Bay Packers.