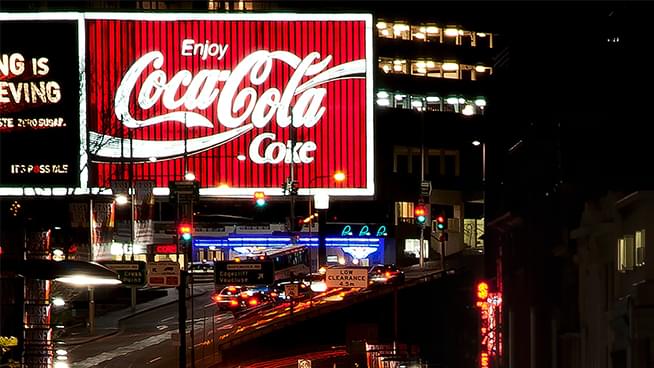 San Francisco’s iconic “Enjoy Coca-Cola” sign will be taken down after standing strong for nearly a century.

Built the same year as the Golden Gate Bridge and the Bay Bridge were opened, the Coca-Cola sign has been around for 83 years, providing a fun and familiar sight for Bay Bridge commuters.

“While we, like many San Franciscans, will miss seeing the sign, we made the difficult decision to not renew the lease as part of our efforts to focus on other digital media platforms that support the growth of our overall beverage portfolio,” said Dora Wong, a spokesperson for Coca-Cola North America.

According to the permit, the cost of the sign’s removal is $100,000 and stipulates it cannot be replaced.

“While the sign will not be visible, we remain committed to the San Francisco community through active support of many civic, cultural and charitable programs,” continued Wong.

The original neon sign has been replaced and upgraded several times over the years, most recently in 2010 when it was converted to an energy-efficient LED display.

San Francisco D6 Supervisor Matt Haney said the city has been working with Coca-Cola to prevent the removal of the billboard, but if they are not successful, they would like to preserve the sign in San Francisco.

“The sign holds symbolic meaning and value to many people in San Francisco, and we would at least like to have it protected and not destroyed,” Haney said. “It brings a lot of memories and nostalgia, and it’s a quintessential San Francisco thing. It’s hard to imagine a better advertisement for Coca-Cola.”

In a 1986 column, San Francisco Examiner bureau chief Eric Best wrote, “The Coca-Cola sign at Fifth and Bryant beat white and red like a giant heart, a neon reminder of the bright lights of Broadway.” Reported SF Gate.

Unfortunately, scaffolding has begun along 5th and Bryant Streets to take down the sign leaving the giant heart and landmark to depart from San Francisco forever.