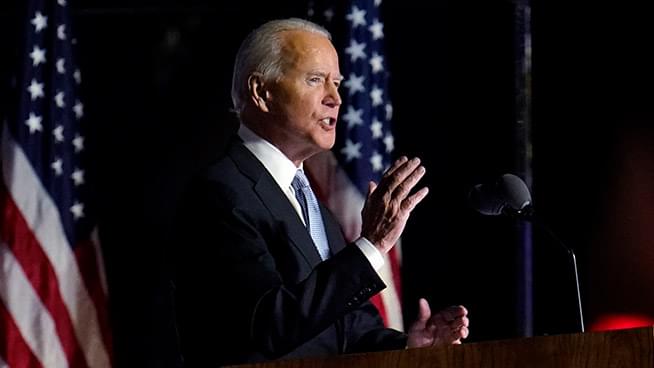 Joe Biden is pledging to be a president “who seeks not to divide but to unify.”

Biden is delivering his first remarks as president-elect at a victory party in Wilmington, after he was officially declared the winner of the presidential election on Saturday. Biden jogged onto the stage wearing a black suit, black mask and light blue tie. He pointed and waved at the screaming crowd gathered to hear him speak.

Echoing his campaign stump speech, Biden promised to be a president who “doesn’t see red states or blue states, only sees the United States,” and said he would work “with all my heart” to win the confidence of all Americans.

Biden touted the fact that he’s won more votes than any presidential ticket in history, calling his win “a convincing victory, a victory for the people.” He also said he was “surprised” by seeing the celebrations and an “outpouring of joy” in the wake of his win nationwide.

Biden said that “once again, America’s bent the arc of the moral universe more toward justice.”