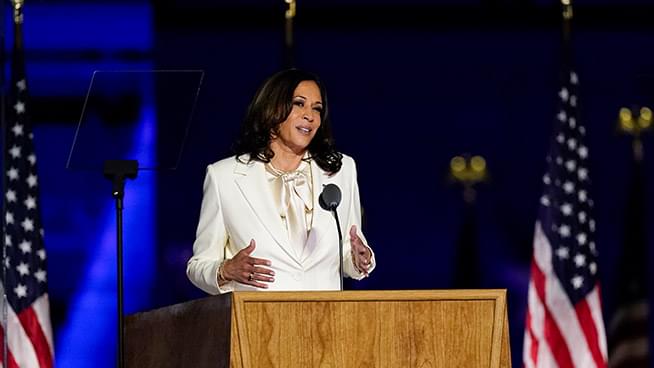 Vice president-elect Kamala Harris is paying tribute to Black women who “so often prove they are the backbone of our democracy.”
Harris, the daughter of Jamaican and Indian immigrants, is the first woman to be elected to the vice presidency.
Harris noted her ascension to the role comes 100 years after the 19th Amendment was ratified and 55 years after the signing of the Voting Rights Act, which expanded who could participate in American democracy.
She praised Joe Biden for having “the audacity to break one of the most substantial barriers that exist in our country” by selecting a woman as his running mate.
“Every little girl watching tonight sees that this is a county of possibilities,” Harris said.
The remarks were some of the most direct she has delivered about her history-making role as Biden’s running mate.
8:45 p.m.
Vice president-elect Kamala Harris says voters have “ushered in a new day for America.”
Harris is speaking Saturday in her first address to the nation since she and Joe Biden were declared the winners of the presidential election.
Harris says voters chose hope, unity, decency, science and truth in choosing she and Biden over President Donald Trump.
Harris, the first woman to be elected vice president, wore a white pantsuit in tribute to women’s suffrage. She also opened her remarks with a tribute to the late Georgia Congressman John Lewis, a Civil Rights icon, who said democracy is not a state but an act. Harris will also be the first Black woman to serve as vice president.
8:30 p.m.
Hundreds of cars filled the parking lot outside the Wilmington convention center in Delaware for a drive-in rally to celebrate Joe Biden’s victory in the presidential race.
With temperatures mild Saturday night, more than 1,000 people sat on the roofs of their cars or milled around in small groups nearby, many cheering and waving American flags or Biden campaign signs. The smell of grilling meat hung in the air not unlike a football tailgate, and some of the attendees danced and sang, sweating through facemasks that appeared to be nearly universally worn.
The campaign set up cranes with towering American flags, an American-flag lined stage and projected a 10-story tall Biden-Harris logo over a digital American flag on the side of a hotel beside the convention center. Blue and red lights illuminated state flags perched on the roof of another nearby building.
Organizers first erected the stage on Tuesday night, expecting to hold a Biden Election Night party. As vote counting continued and no winner was declared, the campaign kept the stage intact and the parking lot remained surrounded by high security fences with police controlling all access in and out.
8:15 p.m.
“The President will accept the results of a free and fair election.”
That’s the message from a White House official Saturday, even as President Donald Trump is refusing to concede after losing to Democrat Joe Biden.
Trump has insisted he will contest the results and his campaign has launched a flurry of legal action in a handful of states trying to overturn Biden victories.
But the official, who spoke on condition of anonymity, also said the Trump administration is following all statutory requirements that govern government transitions.
___
HERE’S WHAT YOU NEED TO KNOW ABOUT THE PRESIDENTIAL RACE:
Democrat Joe Biden has defeated President Donald Trump to become the 46th president of the United States. He won Pennsylvania on Saturday to exceed the 270 electoral votes needed to win the White House. Biden also carried Nevada, Arizona, Wisconsin and Michigan on his path to making Trump the first incumbent since George H.W. Bush to lose his bid for a second term.