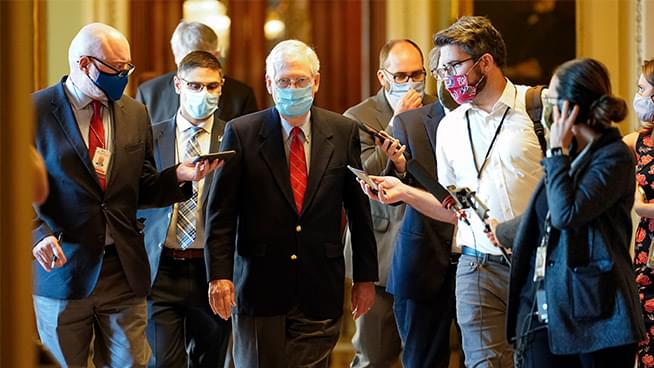 Senate Majority Leader Mitch McConnell of Ky., talks with reporters after he spoke on the Senate floor Monday, Nov. 9, 2020, at the Capitol in Washington. (AP Photo/Susan Walsh)

WASHINGTON (AP) — Despite President-elect Joe Biden’s victory, Senate Majority Leader Mitch McConnell says President Donald Trump is “100% within his rights” to question election results and consider legal options. The Republican leader says the process will play out and “reach its conclusion.” Trump has declined to concede the presidential race and is mounting legal fights, but there has been no indication or evidence of voter irregularities or fraud in the election. McConnell’s comments were his first public remarks after Biden was declared the winner on Saturday. Democratic Senate leader Chuck Schumer called the GOP refusal to accept the outcome “dangerous” to democracy.

I WON THIS ELECTION, BY A LOT!