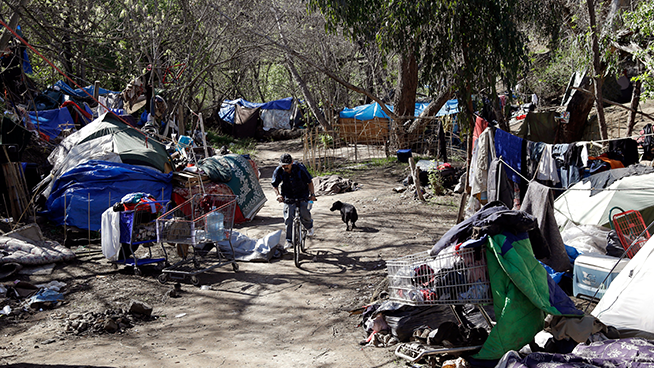 In this March 11, 2014, file photo tents are set up along a pathway in the Jungle, a homeless encampment in San Jose, California.

San Jose Mayor Sam Liccardo announced Thursday that it has partnered with Mastercard to launch a novel program called “Cash for Trash” which gives homeless citizens prepaid cards in exchange for picking up trash in the city.

The 10th largest city in the United States (just over 1 million residents) has many problems, but Mayor Liccardo’s initiative seeks to kill two birds with one stone.

“We have launched this program because we have recognized there is far more we can do in partnership with our homeless residents who want to be part of that solution,” Liccardo said in an outdoor press conference in Roosevelt Park in front of several unsanctioned encampments.

Though beautification is an important plus of the program, Liccardo says its most powerful aspect is that it empowers individuals and allows them to gain dignity.

“We talk a lot about the widening inequality gap in our community and the communities throughout this country, but perhaps the most damaging is the inequality in dignity. And to be able to provide a pathway for our homeless residents, our neighbors, to be part of the solution, to clean the community, to beautify the city in a way that makes us all collectively proud, it tells our homeless, ‘we see you and we know you want to be part of our community,’” said Mayor Liccardo.

The program works by providing homeless residents with garbage bags to collect their own trash since city trash collection programs do not service the unsanctioned residents. Each member of the program receives $4 per bag, up to $20 a day, which is then loaded onto a prepaid MasterCard. However, these don’t act like normal prepaid cards since they have restrictions limiting their use at liquor stores, a measure Liccardo said was important for taxpayers to know that these funds will be used for essentials.

Liccardo said that the first week of the program, which initially planned to launch in February and was delayed because of COVID-19, yielded 27 members who collected over two tons of trash. The initial program launch will accommodate up to 400 participants across 41 encampments. The City of San Jose has allocated $50k for the program in the first year and $60k has also been committed by its third district (the Water District) over the next three years. Liccardo said he wants to continue to grow the program as long as he’s in office.

The short term goal of the Mayor and the city is to reduce trash and give dignity to its unhoused residents, but in the long term, it’s hoping that the program could build trust with that community and start segue members into other city programs that might help them. The gateway mentality of this program hopes that this card might also become a sort of key to mental health and other programs down the road.

San Jose becomes the first city in the U.S. to partner with MasterCard to invest in the novel program though the company said that it hopes to launch the initiative globally, siting interest in other U.S. cities, and even Australian cities, already.