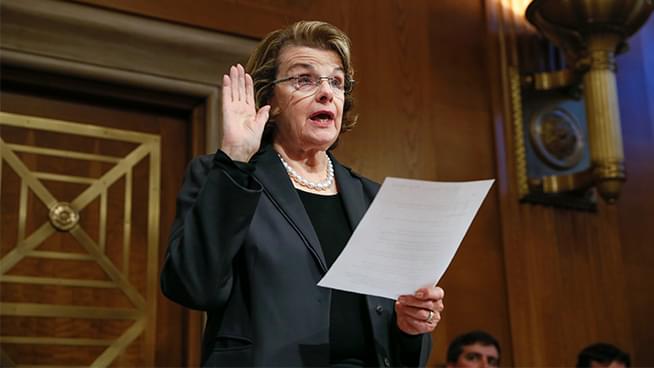 Senate Intelligence Committee Chair Sen. Dianne Feinstein, D-Calif. swears in Nicholas J. Rasmussen on Capitol Hill in Washington, Thursday, Nov. 20, 2014, as he appeared for his confirmation to become the director of the National Counterterrorism Center. He has been serving as the NCTC’s deputy director for the last two years. AP Photo/J. Scott Applewhite

After criticism, Feinstein to step down as top Judiciary Dem

California Sen. Dianne Feinstein says she will step down from her role as the top Democrat on the Senate Judiciary Committee. Feinstein is giving up the powerful spot after public criticism of her bipartisan outreach and her handling of Supreme Court Justice Amy Coney Barrett’s confirmation hearings. The 87-year-old senator in a statement Monday that she will not seek the position in the next Congress. She did not say why, but said she would instead focus on wildfire and drought issues and the effects of climate change, which are important in her home state. She plans to continue to serve on the Judiciary, Appropriations and intelligence panels.

In a statement, Senate Democratic leader Chuck Schumer said he was “grateful for Senator Feinstein’s leadership and contributions to our caucus and country” in the Judiciary post, reported KTVU.

Feinstein’s “experience, decades-long relationship with President-elect Biden, and leadership on so many issues will continue to be an asset for our caucus, California, and the country as we begin a new term with the new president,” said Schumer, D-N.Y.