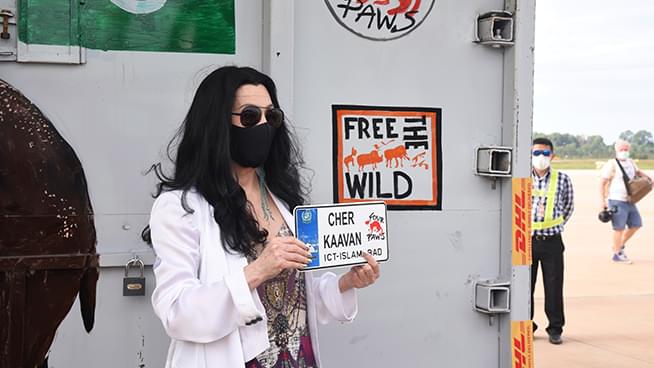 American icon Cher holds a welcoming sign for a rescued elephant named Kaavan arriving at the airport, Monday, Nov. 30, 2020, in Siem Reap, Cambodia. Kaavan, dubbed the world’s loneliest elephant after living alone for years in a Pakistani zoo, has captured worldwide attention, including Cher, who has been closely involved in his rescue. The elephant will join other elephants in a waiting sanctuary. (Pool Photo via AP)

Cher proves again there can be life after love while lending help to a lonely elephant in Islamabad, Pakistan. TV and film producer Phil Fairclough joined Mark Thompson Wednesday morning to explain how Cher saved Kaavan, “The world’s loneliest elephant”.

Kaavan was gifted to Pakistan by Sri Lanka when he was about one year old in the mid-1980s. “He spent decades at the Islamabad zoo in a small enclosure with few of the amenities required for the physical or mental health of an animal of such high intelligence. He performed for visitors, reportedly prodded by handlers to collect cash.” Reported CBS.

Then, in 2012, Kaavan lost his only companion, a female elephant called Saheli, and his demeanor rapidly deteriorated. He became angry, despondent, and given his unhealthy diet, obese. CBS continued, the conditions were so dire at the zoo that a Pakistani court ordered it to be shut down in May this year, and all the animals to be relocated. That sparked a global effort to evacuate the animals, and especially Kaavan.

“I found out about Kaavan from the people on my Twitter,” Cher said in statement announcing plans for the special, to air in 2021.  “They would not stop saying ‘Cher, you have to do something, you have to fix this, you have to save him.’ I thought, how can I fix this? How can I save an elephant who’s been shackled to a shed for 17 years and who is a thousand miles away?”

‘I am so proud he is here…He’s going to be really happy here” said Cher, adding that she was hopeful his ordeal was over.

🐘Kaavan’s journey to freedom from captivity in Islamabad to Cambodia will be a 2021 @SmithsonianChan documentary ❤️ Help us build Kaavan’s forever home 🏡 https://t.co/dzdl4Ew4gn 🙏🏻@ftwglobal #KaavansJourney pic.twitter.com/iTxdzfndNB

For eight years, an elephant named Kaavan had been living alone in a delapidated zoo in Pakistan.

When Cher found out, she helped transfer him to a sanctuary in Cambodia, where he wouldn’t be alone.

When they finally met — this is how @Cher sang to him.pic.twitter.com/DENXezCGZQ

Listen to the full conversation between Phil Fairclough and Mark Thompson here.