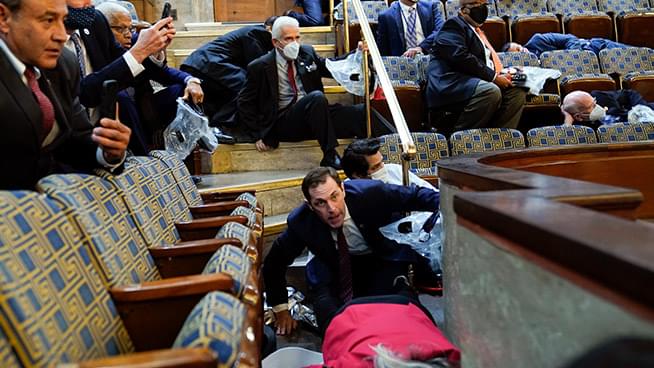 People shelter in the House gallery as protesters try to break into the House Chamber at the U.S. Capitol on Wednesday, Jan. 6, 2021, in Washington. (AP Photo/Andrew Harnik)

The Senate has recessed its debate over an objection to the results of the Electoral College after protesters forced police to lock down the building. Protesters tore down metal barricades at the bottom of the Capitol’s steps and were met by officers in riot gear. Some tried to push past the officers who held shields and officers could be seen firing pepper spray into the crowd to keep them back. AP News reported the skirmishes came just shortly after President Donald Trump addressed thousands of his supporters, riling up the crowd with his baseless claims of election fraud.

What we’re witnessing in the US Capitol is reprehensible. An outright assault to our democratic institutions.

Our hearts are with our Congressional Delegation and the brave public servants that work in our Capitol every day. pic.twitter.com/Qwjry6AhVw

This is terrorism. This is chaos and violence incited by Trump’s continuous assault on our democracy. Ultimately our country will withstand this moment, and then we must hold the perpetrators accountable. #capitol

This is an attempted coup encouraged by the President of the United States. It’s a dark day for our democracy, and the culmination of all of his anti-democratic words and actions from his campaign through his presidency.

We are better than this.

This madness is the direct consequence of Donald Trump’s incitement, aided and abetted by his family and Republicans in Congress.

They encouraged it and purposely allowed it to happen.

Watch their speeches literally from today.

Trump must be impeached and removed immediately.

Isn’t this what MAGA said that antifa would do?

BREAKING – Inside the Capitol Now: They just stormed the Capitol with… a Confederate Flag. And a Trump one to go with it.

This is the coup they’ve wanted – since 1865. pic.twitter.com/EftT1VVIym

They are domestic terrorists. Stop calling them protesters.

The protesters storming the Capitol are not patriots. They are brainwashed, Trump cult followers. It’s shameful and if anyone is hurt, the blood is on Trump’s hands.

Makes you wonder who really are the violent protesters, huh?

This is the angry, armed, ill-informed, America.
Hostilities stoked by @FoxNews and right wing propagandists..@MariaBartiromo @LouDobbs et al.
Drunk on power and realizing they can seize a narrative and, by extension, seize power… the result is this horrifying desperation.