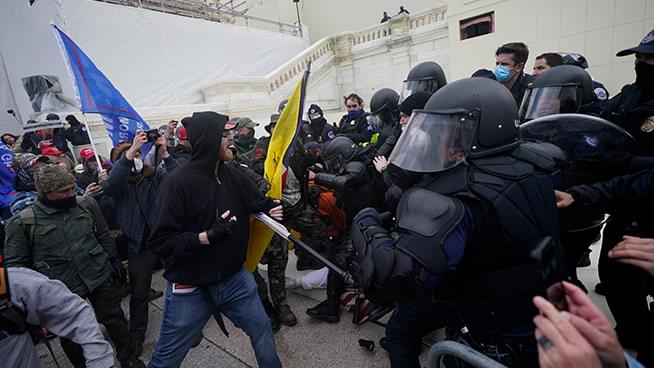 Trump supporters try to break through a police barrier, Wednesday, Jan. 6, 2021, at the Capitol in Washington. As Congress prepares to affirm President-elect Joe Biden’s victory, thousands of people have gathered to show their support for President Donald Trump and his claims of election fraud. (AP Photo/Julio Cortez)

WASHINGTON (AP) — The Latest on Congress’ tally of the Electoral College vote won by Joe Biden (all times local):
2:50 p.m.
Members of Congress inside the House chamber were told by police to put on gas masks after tear gas was dispersed in the Capitol Rotunda amid skirmishes by supporters of President Donald Trump
Pro-Trump protestors breached the U.S. Capitol on Wednesday afternoon, violently clashing with law enforcement as lawmakers were gathered inside to formalize President-elect Joe Biden’s victory in November’s presidential election.
Law enforcement instructed lawmakers to retrieve masks from under their seats amid the clashes. The Capitol building was placed on lockdown, as Trump supporters marched through evacuated public spaces in the building.
After egging on protests, Trump tweeted to his supporters to “stay peaceful” as they violently clash with law enforcement and breached the Capitol building.

Here’s what else is going on:

By The Associated Press