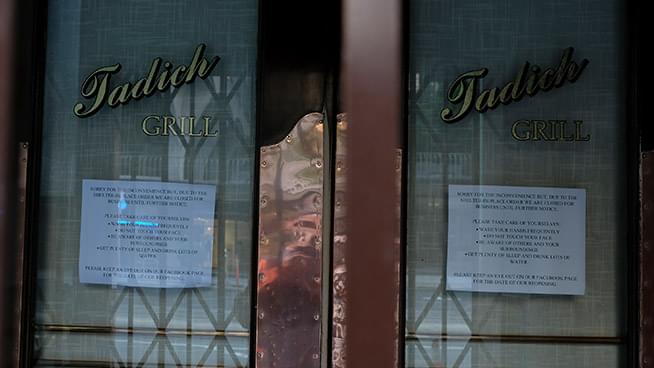 Closed signs are posted in the entryway of the shuttered Tadich Grill in the Financial District Monday, March 16, 2020, in San Francisco. Officials in seven San Francisco Bay Area counties have issued a shelter-in-place mandate affecting about 7 million people, including the city of San Francisco itself. The order says residents must stay inside and venture out only for necessities for three weeks starting Tuesday. It’s the latest effort by officials to curb the spread of the novel coronavirus. The restaurant is California’s oldest continually running restaurant dating to 1849. (AP Photo/Eric Risberg)

Tadich Grill, San Francisco’s oldest restaurant and third-oldest in the country, will receive up to $31,000 a month to help survive during the pandemic. The 171-year-old restaurant, which has been serving fresh seafood, beef, and other stick-to-the-ribs options, announced on Facebook it had to close indefinitely in July after switching to take-out only in March.

“The Barstool fund is a lifeline,” said Yvette Buich, who runs Tadich Grill with her husband, Mike. “It does not cover the mounting bills that we have accumulated since we were forced to close in March, but it will help with just the basics in owning a restaurant in the city. The timing could not have been better since all other sources of money are gone or have stopped.”

The sources include a GoFundMe account, which raised over $69,000 to help the restaurant after owners used both business and personal savings, including Mike Buich’s retirement fund, to pay employees from March to August.

This is the text I got after the call. AMAZING. I never thought we’d have a Dave Portnoy Day pic.twitter.com/G5UO3auiGB

“It’s a no-brainer — you’re out in San Francisco where clearly lockdowns are as bad as they are anywhere,” Dave Portnoy, founder of Barstool Sports said in the call. “We want to be there. We want to help.”

“Pipas said the family was not aware of Portnoy’s history of making racist and misogynistic remarks or the accusations of sexual harassment against him. Last summer, remarks he made in 2016 comparing former 49ers quarterback Colin Kaepernick to Osama bin Laden were resurfaced on social media. The Buich family has been embroiled in its own accusations of racism in the past, tied to a family member who is no longer in the business.” Reported SF Chronicle.

“There’s no room for racism and racist comments,” said Mike Buich’s daughter. “Wherever in his heart he had the ability to make a meaningful difference for small businesses, he’s doing that, and for that we’re grateful.”

“We feel like we are going to make it now,” said Buich. “This is giving us the boost we need until we can open our doors at least 50% capacity again.”