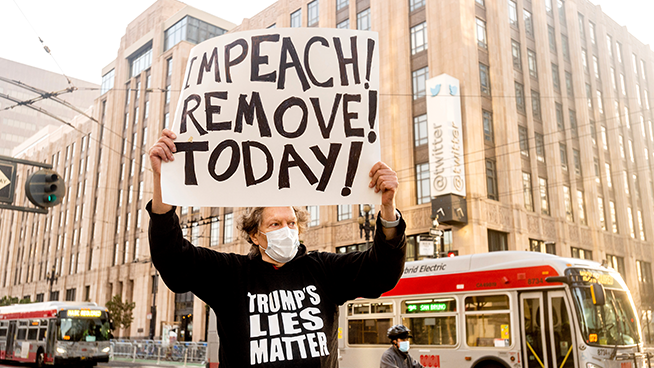 Monday morning, local social media giant Twitter was preparing for the worst as Pro-Trump message boards planned a protest for the company’s headquarters and even employee’s homes.

Twitter had banned the President’s account late last week for fear his words would insight further violence after his continuous unfounded claims of voter fraud frothed his supporters into a violent rage that had them storming the Capitol building.

However, after a tense weekend of preparation from the company and local law enforcement, no protest was to be seen. Not a single protester stood outside, not a single red hat, nor a Trump flag.

The sight was an unsettling one after last week’s riot, turned fail coup, was perpetrated by the very same group. Trump fanatics had proven just how far they would go for their president and images of a similar siege laid heavy over the city like a blanket of fog.

Though, had the Trump supporters actually shown up their protest would be purely symbolic since the building has been empty since last March as the company was an early adopter of an indefinite work from home policy to protect their workers from the spread of COVID-19.

Nevertheless, the San Francisco Police Department came out in a show of force as to prepare for possible violence by terrorist Trump supporters.

Metal barricades were erected around the circumference of the building which lies halfway down Market Street between 9th and 10th street. The parameter was lined with dozens of officers, some even seen with riot helmets at their hips.

There is a heavy police presence at Twitter Headquarters on Market street. Police are set up all along 9th and 10th streets as well. SFPD prepared for Pro Trump protests in response to @TwitterSafety banning President Trump. I'll tell you what I saw on @kron4news now! #twitter pic.twitter.com/qNmAFeKCMC

Officers waited patiently, and as the 8 a.m. call-time came and went, not a soul approached the building. Only a single counter-protestor stood adjacent from the building with a sign that read, “IMPEACH! REMOVE! TODAY!” and a sweater with “Trump Lies Matter,” printed across the front.

Identified as Kenneth Lundgreen, 71, by the San Francisco Chronicle, Lundgreen said he wanted to be a peaceful counter presence to the vitriol of Trump’s minions.

As the afternoon rolled on still no sign of a protest had been seen. No employees have been reported as harassed.

How it started… how it’s going. The Trump “protest” at @Twitter HQ edition pic.twitter.com/quSO8Crf7L