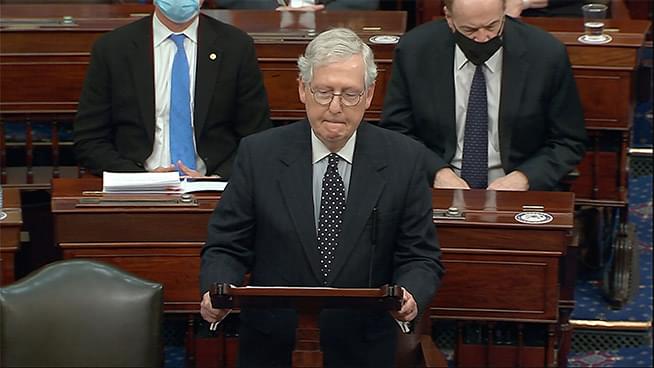 In this image from video, Senate Majority Leader Mitch McConnell of Ky., speaks as the Senate reconvenes after protesters stormed into the U.S. Capitol on Wednesday, Jan. 6, 2021. (Senate Television via AP)

WASHINGTON (AP) — Senate Majority Leader Mitch McConnell is rejecting a Democratic attempt to swiftly call the chamber into emergency session for an impeachment trial of President Donald Trump. The Kentucky Republican’s decision was described by a spokesman, and it all but assures that those proceedings won’t occur until after Trump leaves office. McConnell’s decision comes as a GOP strategist says McConnell thinks Trump perpetrated impeachable offenses. McConnell also sees House Democrats’ drive to impeach Trump as a chance to diminish Trump’s sway within the GOP. The House was all but certain to vote Wednesday to impeach Trump for inciting last week’s Capitol takeover by a pro-Trump mob.

“In light of reports of more demonstrations, I urge that there must be NO violence, NO lawbreaking and NO vandalism of any kind. That is not what I stand for, and it is not what America stands for. I call on ALL Americans to help ease tensions and calm tempers. Thank You.”