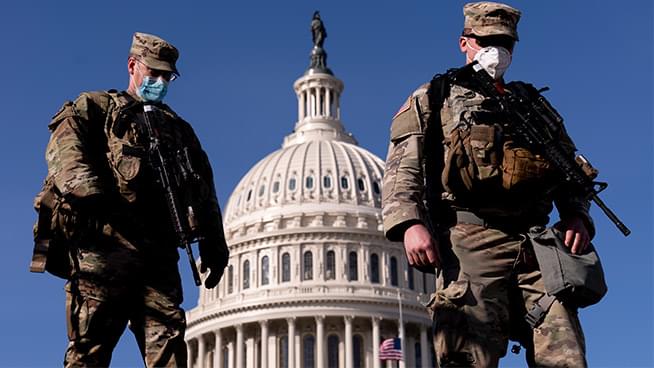 Members of the National Guard walk past the Dome of the Capitol Building on Capitol Hill in Washington, Thursday, Jan. 14, 2021. (AP Photo/Andrew Harnik)

Governor Gavin Newsom tweeted a video Thursday afterrnoon of himself explaining the steps California is taking after the riots at the U.S. Capitol last Wednesday.

He explained the state is, “actively working with federal, state & local law enforcement to ensure those disgraceful actions are not repeated here.”

Newsom said he activated, “The National Guard to support the CHP to enhance security with an initial deployment of up to 1,000 guard members to protect critical state infrastructure in and around the state capitol,” in the pre-recorded video.

In light of events in our nation’s capital last week, CA is taking important steps to protect public safety at the State Capitol & across the state.

Newsom said California, “Will take every necessary measure to protect public safety and our Democratic principles and to ensure that those disgraceful actions are not repeated here.”

After the U.S. Capitol riots last Wednesday, Governor Gavin Newsom is expected to call on the National Guard to secure California’s State Capitol ahead of President-elect Joe Biden’s inauguration.

Newsom is expected to make the announcement Thursday afternoon, with the Guard arriving Friday, according to Ashely Zavala, a reporter for KRON4.

Announcement is expected this afternoon, I’m told the guard could arrive as soon as tomorrow. pic.twitter.com/MQ5VMqJOMn

“I can assure you we have heightened, a heightened level of security as it relates to some concerns,” Newsom said in a press conference Monday.

Zavala shared footage of the fence surrounding the California State Capitol on Twitter.

BREAKING: A 6ft fence is being built around the the entire perimeter of the California State Capitol this morning.

I’m told this is one of the steps State leaders are taking to protect the Capitol in anticipation of more demonstrations. pic.twitter.com/FztmUvtUw9

A look outside the California Governor’s side of the state Capitol, where a six foot fence wraps around the entrance, along with a handful of CHP officers.

This fence will be up around the entire building by this afternoon. pic.twitter.com/NnamOxHgyb