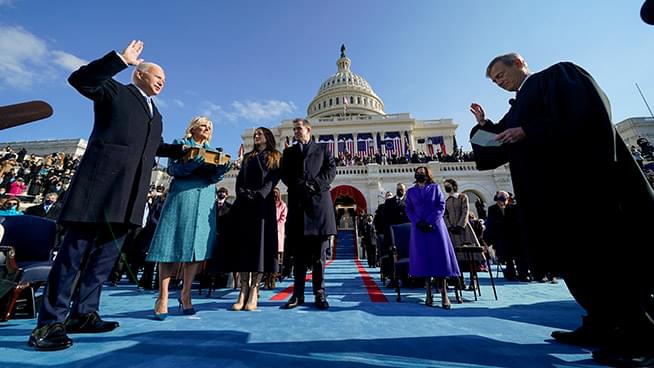 WASHINGTON (AP) — Joe Biden took the oath of office at noon Wednesday to become the 46th president of the United States. He takes charge in a deeply divided nation, inheriting a confluence of crises arguably greater than any faced by his predecessors.

Kamala Harris has been sworn in as the nation’s first female vice president. The former U.S. senator from California is also the first Black person and the first person of South Asian descent elected to the vice presidency and becomes the highest-ranking woman ever to serve in government.

President Joe Biden is calling on Americans to overcome their divisions, declaring in his first address in office that “without unity, there is no peace.”

Biden also pledged during his inaugural address Wednesday that he would be honest with the country as it continues to confront difficulties, saying that leaders have an obligation “to defend the truth and defeat the lies.”

He asked even those who did not vote for him to give him a chance. He said, “Hear me out as we move forward.”

He added, “We must end this uncivil war that pits red against blue.”

Listen to the complete inauguration here.

BREAKING: Joe Biden is sworn in as the 46th president of the United States https://t.co/tcmAzrzqTx pic.twitter.com/ShNj0rc7oT

The 22-year-old is the youngest inaugural poet in U.S. history: https://t.co/SIPU57hEKH pic.twitter.com/X4JQZO8rlY

Let’s get loud… for our next president and vice president of the United States! 🕺

Thank you @JLo for coming and being a part of this historic moment! #InaugurationDay pic.twitter.com/nNNtqk7pRC