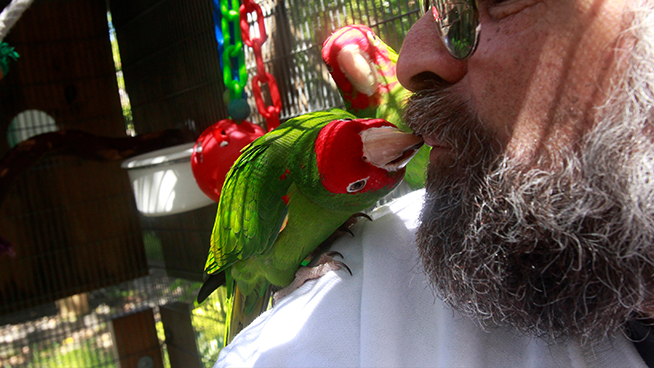 In this May 20, 2010 photo, Malcolm Raff poses for a photograph with cherry-headed conures at his home in Berkeley, Calif. The wild parrots that call San Francisco home have become a given of city life, squawking their way to their favorite spots, delighting tourists. The famous flock is now about 300 strong, more than triple what it was 10 years ago. (AP Photo/Jeff Chiu)

San Francisco is known for a lot of things: the Golden Gate Bridge, sourdough bread, big tech, and much more. Though if you’re a local, you know one of the hidden pleasures of San Francisco is seeing a tree full of parrots as you walk along the Embarcadero.

While the city doesn’t flaunt its strange flock of feathered friends, it sure appreciates them.

Recent Reddit posts have residents from every corner of the city sharing their personal photos of their interactions with these red-faced cuties.

The cherry-headed conures, also known as red-masked parakeets, have debated origins, though it is believed the flock started when a domesticated pair escaped in the early ’90s. According to AP news, the flock was 300-strong back in 2010.

These birbs really get around. from sanfrancisco

Heard there was a parrot party going on 🦜 from sanfrancisco

Check out this amazing painting by Reddit user u/Robin_Galante, showing a scene of our avian buddies perched in Corona Heights.

Parrots in Corona Heights. I painted this a few weeks ago after a walk in the neighborhood- parrots were everywhere! from sanfrancisco