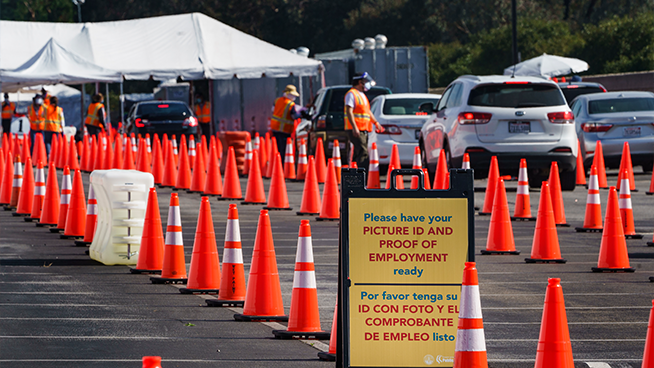 Motorists are screened as they line up for a COVID-19 vaccine appointment at the mass vaccination site at the parking lot of L.A. County Office of Education headquarters in Downey, Calif., Wednesday, Feb. 3, 2021.
(AP Photo/Damian Dovarganes)

In late January San Francisco’s first-ever mass vaccination site opened at City College and today we are starting to see the city’s second site at the Moscone Convention Center begin construction as signs and other infrastructure start to appear.

Dozens of “Vaccine Appointment Loading Zone” signs in the back of work trucks, barricades, and more were captured by SFist writer Brock Keeling.

A worker told Keeling that the site, which has been home to some of the state’s largest conventions, will be eventually vaccinating 7,000 people a day. SF Mayor London Breed said the three sites combined will net them 10,000 vaccinations a day once the state can supply them.

While vaccine shortages are seemingly the countries biggest problem at hand, it is not stopping similar sites from being prepared around the Bay Area.

Wednesday, California Governor Gavin Newsom also announced he is working with President Joe Biden on creating another Bay Area mass vaccination site at the Oakland Coliseum similar to the one at Dodgers Stadium in Los Angeles.

Newsom said in a statement that the state is also partnering with the Federal Emergency Management Agency (FEMA) to launch “first-in-the-nation vaccination pilot sites” that are expected to open on February 16th.