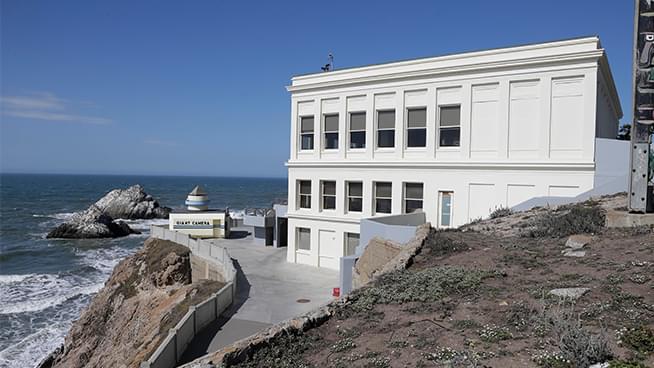 FILE – In this Oct. 9, 2013, file photo, is the Cliff House overlooking Seal Rocks in San Francisco. The iconic Cliff House restaurant that has served tourists and locals for more than a century from atop a hill overlooking the Pacific Ocean is closing its doors at the end of the year. Dan and Mary Hountalas, the restaurant’s proprietors since 1973, said in a post Sunday, Dec. 13, 2020, on the restaurant’s website they are closing Dec. 31 because of losses brought on by the pandemic and not being able to renew a long-term operating contract with the National Park Service. (AP Photo/Eric Risberg, File)

After San Francisco’s historic Cliff House restaurant permanently closed on December 31, 2020, many thought they would never be able to enjoy the building’s spectacular views of the Pacific Ocean again. However, there is a glimmer of hope for the building after all.

“The San Francisco Board of Supervisors unanimously voted Tuesday in favor of a resolution urging the National Park Service, which owns the property, to immediately make use of the space while it searches for a long-term tenant. A National Park Service spokesperson confirmed that the federal agency plans to do so soon — and that the goal is for the building to house a restaurant once again, reversing a previous stance that a restaurant might not be a viable tenant for the property due to the state of the food industry.” Reported The SF Chronicle.

In a statement from Dan and Mary Hountalas, who ran the Cliff House for over 47 years, said they were, “Seeking help in holding the NPS publicly responsible for their failures resulting in the loss of the livelihood of 180 employees and their families, as well as the loss of one of San Francisco’s treasured landmarks and the financial loss suffered by those of us local folks who did our best to stay true to this legacy.”

San Franciscans followed along the restaurant’s dilemma, working to save it as the public discovered it costs tens of thousands of dollars every month to maintain and guard the massive building, until the iconic sign came down and the restaurant closed. In another turn of events, the building may reopen as soon as spring.

Even after its closing, the public fought the restore the building. Numerous organizations, including the San Francisco Travel Association, the San Francisco Chamber of Commerce, and the Golden Gate Restaurant Association, wrote a letter to Senator Dianne Feinstein urging her to work with the National Park Service to quickly find a short-term use like a restaurant for the building, as noted in the resolution by Supervisor Connie Chan.

“As the City reopens and recovers from the COVID-19 pandemic, it is critical that iconic landmarks like the Cliff House be reactivated and able to attract locals and tourists,” reads the resolution from Chan.

“We are committed to maintaining the Cliff House building as a restaurant and public space,” Julian Espinoza of the National Park Service said by email. “Since the start of this process, we have asserted our belief that the building belongs to the public — and not to any single group or commercial entity.”

Whatever the future holds for the building, it will likely have a new name, and therefore the famous sign, because the Hountalases trademarked the name “The Cliff House”.