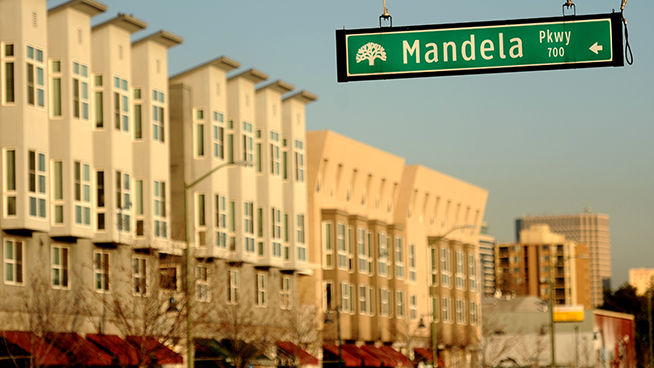 A sign for Mandela Parkway hangs in front of the Mandela Gateway apartment complex, left, in Oakland, California (Photo/Noah Berger)

In a new report by NBC Bay Area’s Investigative Unit, it was discovered that several Oakland landlords have been serving eviction notices throughout the pandemic despite it not being legal to evict tenants due to sweeping eviction moratoriums.

According to the report nearly 500 notices had been posted through November of last year. By reviewing city records NBC was able to track down one of the largest perpetrators: Madison Park Financial.

One of their properties, Vulcan Lofts in the Fruitvale neighborhood, has been served the most of any building in Oakland, amounting to 10% of all eviction notices that the report was able to find. Some residents know they cant be evicted and see the letters as harassment.

“It’s exhausting and infuriating,” Madison Park tenant Lili Thomas-Brumme told NBC. “At first they kind of showed up on my doorstep and then there was one I think taped to the door a day later. And then maybe a week after that, I got one in the mail as well.”

Oakland city officials wanted tenants to know its legal to serve the notice, but as of right now it’s not legal for them to act on it. In fact, the city sends notices of tenant rights to anyone who receives an eviction notice.

“There will inevitably be some property managers who make mistakes – some in good faith and some intentionally; we want the community to know that in most situations there are options and they do not need to immediately vacate their homes,” City Spokesperson Autumn King told NBC in a statement. “Tenants who receive an Eviction Notice should contact a RAP housing counselor at 510-238-3721.”

The real-estate management company might have crossed this line and pressured tenants to self evict due to the misleading notices that gave tenants three options: “a) to pay said rent, or in the alternative, b) to quit and deliver up possession of said premises, or in the alternative, c) deliver a signed declaration of COVID-19-related financial distress, and documentation thereof, if applicable, to the Landlord”

Under the moratorium, tenants do not have to pay the full amount of rent and cannot be evicted for not complying

Local tenant’s rights organizations were able to stop Madison Park from sending further misleading notices, but they are still worried about confusing and conflicting information. The company defended its actions siting it was simply issuing the 15-day notice that was allotted to landlords when the state-wide eviction moratorium (COVID-19 Tenant Relief Act AB3088) went into effect in September.

Only weeks ago Governor Gavin Newsom extended COVID-related evictions through June 30th. Under the new extension renters must pay 25% of rent owed and must eventually pay off debt, but still cannot be evicted for their owed debt.