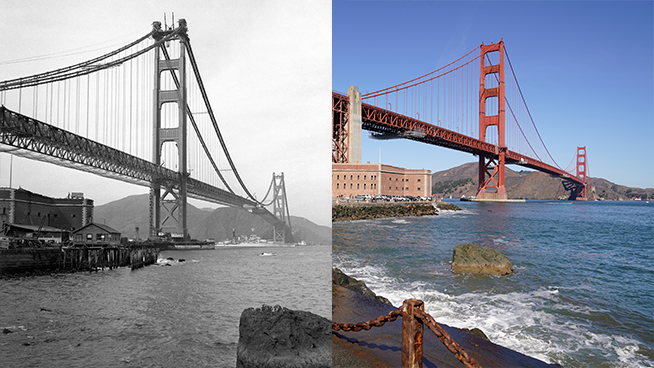 Left: A view of the Golden Gate Bridge November 1936, months before its opening. The warship seen passing under the bridge was on its way to be present at the opening of the Oakland Bay Bridge. Right: On a clear day at the Golden Gate Bridge in San Francisco on Oct. 11, 2020.(Left: AP Photo: Uncredited | AP Photo/Eric Risberg)

San Francisco has always been a city of iconic beauty. In fact, the Golden Gate Bridge is one of the national and international symbols of California. So as the city and its skyline continue to grow and transform, it is always fascinating to see what came before.

Recently a group of Redditors have been posting what their neighborhoods looked like 100 years ago. The difference is captivating.

Here a poster compares the Twin Peaks intersection of Market St and Clayton St. At the top is a view of the intersection from 1917 when it used to be a streetcar switchback. The bottom picture is from a 2019 Google Maps screenshot.

The next comparison shows the now destroyed Southern Pacific trestle bridge (seen in a photo from 1910) that once stood over the intersection of Dolores St and 27th St.

The next photo depicts one of the main San Francisco’s thoroughfare 19th Ave, before its “widening” to accommodate for increased traffic. The top photo shows the intersection of 19th St and Taraval St. in its original suburban form from 1934.

After the completion of the Golden Gate Bridge in 1937 however, the street was marked for expansion to allow for the increase of vehicles heading to and from the bridge. The task was mostly accomplished without building demolition, largely focusing on the removal of front yards and utility poles according to the Western Neighborhoods Project (which itself has a wealth of fascinating photos from San Francisco’s storied history.)

19th Avenue before the widening in 1934 vs. Today from sanfrancisco

Finally, we see one of the largest differences in the before and after comparison of the Quintara St. & 12th Ave intersection where pictured is an almost completely undeveloped view of the Sunset district circa 1928. Looking down at Ocean Beach from Golden Gate Heights, the photo shows mostly sand dunes and unwieldy patches of shrubbery which gave it its original name the “Outside Lands.”

Though Golden Gate Park and the Twin Peaks Municipal Tunnel had already been completed, mass suburbanization of the district would not start until the ’30s, where it would see its fruition in the ’50s.

Golden Gate Heights in 1928 vs. Today from sanfrancisco