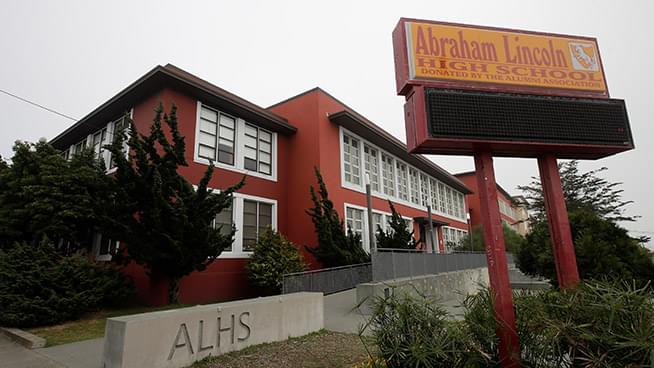 FILE – In this March 12, 2020, file photo, Abraham Lincoln High School stands in San Francisco. The San Francisco school board has voted to remove the names of George Washington and Abraham Lincoln from public schools after officials deemed them and other prominent figures, including Sen. Dianne Feinstein unworthy of the honor. After months of controversy, the board voted 6-1 Tuesday, Jan. 26, 2021, in favor of renaming 44 San Francisco school sites with new names with no connection to slavery, oppression, racism or similar criteria, the San Francisco Chronicle reported. (AP Photo/Jeff Chiu, File)

Seth Brenzel, a gay white father of a bi-racial child, was denied a spot on the San Francisco Board of Education’s volunteer parent committee because he does not bring enough diversity to the group.

The Parent Advisory Council, also know a the PAC, unanimously supported Brenzel to join their all-female committee and submitted his name to the school board. San Francisco Chronicle columnist Heather Knight reported that during a board meeting on Tuesday night, his approval was debated for almost two hours.

The SF school board tonight spent two hours talking about whether to allow a gay dad of mixed-race SFUSD kids to volunteer for one of several empty seats on a parent advisory group. Their problem was that he’s white and doesn’t bring diversity to the group. 1/2

Opposition to his approval focused on the fact that he is white and will not provide enough diversity on the council. The council currently has 5 empty seats.

Brenzel, who is the executive director of a music program for children, is openly gay. He lives in San Francisco with his husband and their young daughter, reported the Daily Mail. If approved, Brenzel would have been the only father on the council.

According to an online transcript, when prompted a representative of the PAC said,”The P.A.C. can have up to 15 regular members and three alternates. Currently, we have 10 regular members and no alternates. I’ll give you the breakdown now. Currently the P.A.C has two African-American parents, one Asian-American parent, three Latinx parent, one pacific islander parent and three white parents. Currently all of those are women.”

KGO’s Mark Thompson thought sharing the story was an attempt to distract from Trump’s impeachment trial.

So, #FoxNews isn’t carrying the #ImpeachmentTrial and, as we talked about on @KGO810 , Fox News couldn’t wait to include the crazy #SFSchoolBoard as a vehicle to smear all “the libs” in this evening’s broadcast.@hknightsf @cmarinucci pic.twitter.com/nBXP9Pef5L

Many people shared their support of Brenzel on social media.

So proud of our very own parent advocate @sethbrenzel. We’ve witnessed first-hand his tenacity for public ed, a willingness to volunteer exhaustively at his kid’s school, & his incredibly kind soul. We hate to see our parent members impacted by ugly politics. We 💗 & support you!

Another supporter of Brenzel, identified in the transcript only as Cindy, called the hearing a “public shaming” and “bullying behavior by people of power.”

“You just talked about not being enough dads in the group,” said Cindy. “He is a gay father of – he has a mixed race family. I don’t know what more you need to just – he’s a good person. That’s all I have to say.”

Commissioner Matt Alexander, a new board member and former district principal, said, “I’m probably going to get complaints now I’m telling white parents not to be involved or something. I want to be clear, that’s not what I’m saying…White parents also in the city tend to have a lot of privilege and power and access the board of ed in various ways.”

A Brenzel supporter noted he would be the only male on the council, and the only representative of the LGBTQ community, adding that “there is diversity beyond the color of our skin.” Yahoo!News reported, another said Brenzel is “overly qualified if anything for this position. He’s ready to serve, and you should be grateful for his service.”

Ultimately, the school board voted against approving Brenzel’s and instead asked council representatives to find more candidates for consideration. The same school board voted 6-1 in January to change 44 school names as the historical figures have ties to racism or have ‘dishonorable legacies’ despite basing the decision on incorrect Wikipedia articles.