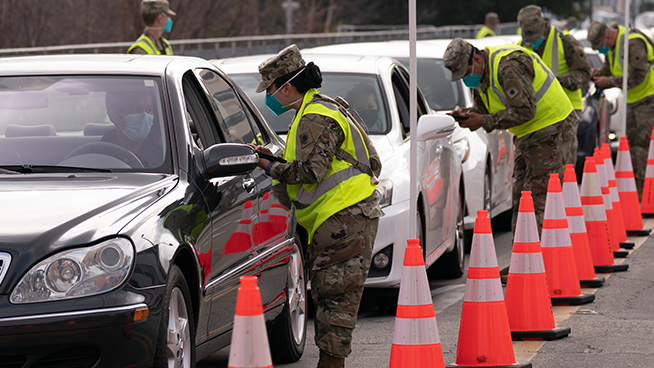 Members of the National Guard help motorists check in at a federally-run COVID-19 vaccination site set up on the campus of California State University of Los Angeles in Los Angeles, Tuesday, Feb. 16, 2021. (AP Photo/Jae C. Hong)

Tackling logistical problems of one of the deadliest global pandemics in the last century is surely something that people often ignore when criticizing vaccine distribution. However, whether it be shortage of vaccines from the federal government, possible inequitable distribution, or failing to get appointments, the goal post is ever-moving in a post-vaccine world.

On Tuesday two massive new sites in California bring hope to millions as Los Angeles County and the Bay Area, the two regions most impacted by COVID-19 in the state.

“Today we launched two new sites in partnership with FEMA providing an ADDITIONAL 84,000 doses of the vaccine to CA every week,” CA Governor Gavin Newsom said in a tweet. “These sites will also have mobile units that will focus on vaccinating harder to reach communities.”

One of the aforementioned sites opening today is The Oakland Coliseum site, which will be capable of vaccinating 6,000 people a day and serves alongside Levi’s Stadium (15,000/day) in Santa Clara and Moscone Center (7,000/day) in San Francisco as the regions largest vaccination sites.

Tomorrow, the @Athletics stadium will become a vaccination site thanks to CA’s partnership with @FEMA. Check eligibility and register for an appointment at https://t.co/PepleSyC5j! pic.twitter.com/H1G8I2vqYQ

Unfortunately, San Francisco concurrently announced that it will be temporarily closing its Moscone Center and CCSF sites until more supply of the COVID-19 vaccine arrives. These two sites account for over 70% of the city’s total distribution network.

“I’m frustrated because we’ve shown that SF can administer shots as soon as they come in,” San Francisco Mayor London Breed said.

“CCSF has been running well for weeks. The reports from Moscone are overwhelmingly positive. The only thing holding us back is a lack of supply, and I’m hoping that will change soon.”

Moscone, with no set timetable yet, is set to resume as supply increases, but has enough doses to inoculate those who have already scheduled their second dose. CCSF will resume Friday, but only for distributing second doses until supply increases. It will not cancel existing appointments.

The City has also announced the opening of its third planned mass vaccination site in Bayview, which when combined with a fully operational Moscone and CCSF will put the city at a 10,000-a-day capacity.

Today we announced the launch of our third high-volume vaccination site at the SF Market in the Bayview. We’re pushing forward to make vaccines available and accessible to all of our communities, especially those that have been hardest hit by COVID-19. pic.twitter.com/5B94KFuEFy

The Oakland Coliseum is set to run 6 days a week and those who are looking to check their status and make appointments can find information here: myturn.ca.gov

However, as SF shuts down from vaccine shortages and the new regional Oakland site opens, those looking to sign up have noticed San Francisco residents are classified in a different rollout tier as their East Bay counterparts.

Initially the region was prioritizing healthcare workers and elderly residents, but as those communities in the A-Tier become increasingly inoculated, B-Tier residents including educators, food workers, and emergency responders, are now able to make vaccine appointments. Though San Francisco’s Public Health Department said that it will not open appointments to B-Tier residents until late February according to SF District Supervisor Matt Haney.

“Appointments [are] available at the Coliseum for educators, food workers, emergency responders who live in Alameda County. Still not unfortunately for SF residents,” Haney tweeted.

When asked why, he stated it is “because our Department of Public isn’t allowing people in 1B tier yet to be vaccinated yet, anywhere, until 2/24. So the state system won’t allow SF residents in that category to make appointments. I think that’s something they should change.”

Appointments available at the coliseum for educators, food workers, emergency responders who live in alameda county. Still not unfortunately for SF residents 😕😣 https://t.co/3F7xshE8wa

Though the state has administered 6.25 million vaccines to date many are still anxious for their turn, even trying to refresh the state’s page until the desired results appear. A tactic that apparently is successful for some.

My sister (Oakland-resident teacher) is getting the same message. Apparently if you *do* get through to the calendar page, *stay there* (even if it seems like no appts are available) and toggle back and forth between Feb. and March and ~10 min, new appts pop up. Good luck!

Haney put the problem succinctly: “‘Every other week a new plan”

Though the root of the problem is far from singular, the chaotic nature of the rollout is leaving many confused.