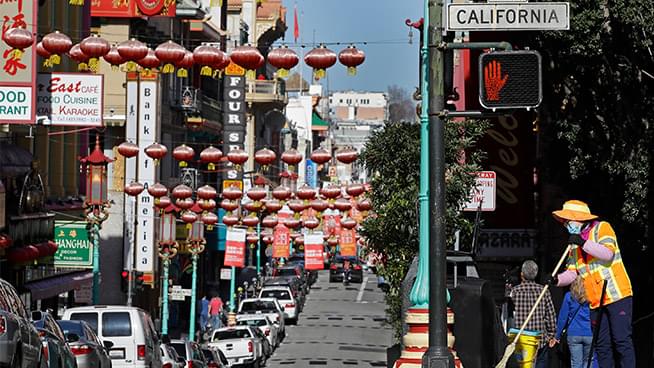 FILE – In this Jan. 31, 2020, file photo, a masked worker cleans a street in the Chinatown district in San Francisco. Police are stepping up patrol and volunteers are increasing their street presence after several violent attacks on older Asians stoked fear in the San Francisco Bay Area’s Chinatowns and subdued the celebratory mood leading up to Chinese New Year. (AP Photo/Ben Margot, File)

San Francisco, along with the rest of the country, has unfortunately seen an uptick in violent crimes against Asian Americans and Chinese Americans since the start of the coronavirus pandemic.

San Francisco Police Department have acknowledged the rise in crimes and have been on patrol to keep neighborhoods safe.

In a press release, “San Francisco Police also urge all members of the Chinese community to be suspicious of strangers claiming to provide relief from a curse or illness or those who provide “purification” ceremonies in which cash and valuable items must be offered as part of the process.”

San Francisco Mayor London Breed expressed her concerns on the, “Unacceptable attacks against our Asian community” on Twitter.

This weekend I’ve been out with our teams from the Street Violence Intervention Program after a number of unacceptable attacks against our Asian community.

Violence has no place in our city. We’re working with our partners in Chinatown to prevent it and hold people accountable. pic.twitter.com/uy1jRNGRVQ

SF police have investigated multiple racially motivated crimes including in the, “Sunset District where an Asian American woman’s home was vandalized and a letter saying, “I wear my mask if I want F**KING ASIAN you create the virus” reported ABC7.”

“The rapid increase in criminal acts targeted against members of the Asian community, particularly Chinese Americans, who live and work in Alameda County is intolerable,” Alameda County District Attorney Nancy O’Malley said as she announced the creation of a special response unit focused on crimes against Asians, and particularly older Asians.

Dr. Russell Jeung, Professor and chair of Asian American studies at San Francisco State University joins The Pat Thurston Show to discuss a string of recent Covid-related attacks against Asian Americans. Listen to the conversation below.